The Infant of Prague – Warrior for Our Times

The Infant of Prague – Warrior for Our Times 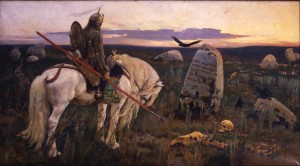 I have to admit that the Infant of Prague was one of those Catholic devotions that was not immediately accessible to me as a convert.

“Help me out here. What’s with Jesus dressed up as a baby doll?”

But some time ago I had an experience that made me realize that the Infant Jesus–and especially the Infant of Prague image is not just a baby doll, but the image of a Knight in White Armor–the Infant who is also a Warrior King.

While on a visit to lead a parish mission in Oklahoma I had the chance to visit the National Shrine of the Infant of Prague in Prague, Oklahoma. (They pronounce it Prage).

While I was there I had a religious experience that opened my heart to the Infant of Prague. In the end I bought an image of the Infant  for my little oratory and learned to appreciate this not immediately winsome devotion. I can remember I felt happy about this: “I like the Infant of Prague now! I guess that means I’m really a Catholic at last…”

Here’s how it happened: readers should understand that the Infant of Prague is very alien to the typical Bob Jones graduate…The first impression is, “Good heavens! Why is baby Jesus dressed up like that? Isn’t it all a bit over the top? Isn’t thatt some kind of fancy Catholic idol or what?” But putting my prejudice on one side and wanting to ‘affirm and not deny’ I learned about the history of the devotion and was given a very nice tour of the shrine including a look at a cupboard full of all the different outfits they had for him.

So I wanted to try to understand this (what seemed to me) a rather unusual devotion. Then I learned that the Infant of Prague actually started out with Saint Theresa of Avila. She had a devotion to the child Jesus. Bingo! A connection with my favorite Therese of Lisieux who also had a devotion to the child Jesus and spiritual childhood and spiritual innocence. I mean, I actually wrote a book about the Little Way...so I’m beginning to get it.

So after the tour I thought I’d kneel down and see if I could get hold of this a little bit more. As I’m kneeling I begin to understand the child dressed in royal robes and crown, for the whole image tells us that although he was a child born naked and squawking in a stable he was at the same time the royal prince of the house of David. He was a simple child, yet King of Kings and Lord of Lords. Furthermore, this is my destiny. I cannot enter the kingdom unless I become as a little child, but to enter the kingdom and be a royal adopted prince, a Son of God and a brother of Jesus is my ultimate destiny.

Then as I’m kneeling there I begin to see that this child is more than that. Much more. Continue Reading