The Slaughter of the Innocents Today

The Slaughter of the Innocents Today 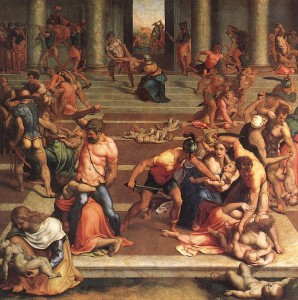 Today is the Feast of the Holy Innocents and it is one of the most heart wrenchingly relevant of all of the church’s feasts.

With great and terrible irony we see in the slaughter of the Holy Innocents the wrath of the world against the gift of God.

So the violence and demonic hatred of the family continues: The story is stunning and simple in its terror: King Herod’s throne and dynasty is threatened by the possibility that the real King of the Jews has been born. Remember that Herod was an imposter. A foreign and from a convert family, he assumed the throne and made himself the King of the Jews. In a bald attempt to consolidate and conserve his power, prestige, prosperity and pleasure he slaughtered every boy two years and younger in the Bethlehem area.

Modern Biblical skeptics dispute the historicity of the story. They say this was fabricated to make Jesus seem like a second Moses: Moses was also saved from a cruel slaughter of the infants. Moses also came up out of Egypt. Furthermore, they see the reference in Matthew’s gospel to the fulfillment of prophecy and argue that Matthew or whoever it was who wrote the gospel made it all up. They argue that there are no historic references to the slaughter so it must not have happened. This article explains the personality of Herod the Great and argues that if he murdered three of his sons and one of his wives and various others in order to defend his throne, dynasty and memory it would have been completely consistent with his behavior to have murdered children. Furthermore, the population of Bethlehem at the time was very small and it is likely that the number of children killed was no more than about 20 or 30. In a cruel and genocidal age this was not noteworthy.

What is more important is to consider Herod’s motives. Continue Reading