The Hilarious Evangelist – On Laughter in Religion

The Hilarious Evangelist – On Laughter in Religion 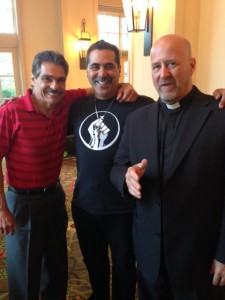 I’m waiting for my ride at San Antonio airport. The car pulls up. A Latino fellow leans out the passenger window with a huge grin, “Hey Father Longenecker! I get to meet you at last! I read your stuff all the time man!”

It was Catholic lay Evangelist Jesse  Romero. I have had the pleasure of spending a weekend with Jesse and Dr Ray Guarendi at the Fullness of Truth Conference in San Antonio

Both are dynamic Catholic lay evangelists and both are very joyful, funny, quick witted speakers. They delivered sound Catholic teaching while keeping the 2,000 strong audience laughing.

One person said at the conference he not only laughed, but he was moved to tears with some of the stories of faith and triumph.

So what is the use of laughter  in religion?

They would say that people like Dr Ray and Jesse are mere entertainers–lolling Catholics along with a feel good religion.

Hang on a minute. Anybody who knows anything about effective communications knows that you have to touch the heart as well as the head.

There’s an old Russian saying, “The heart moves the feet.” In other words, it is the emotions that motivate. In fact the word “emotion” and “motion” and “motivate” all come from the same root.

The mind might be informed, but until the heart is moved nothing moves.

When the emotions are touched the heart opens and when the heart opens the whole person opens. A little vulnerability takes place and God can slip in past the watchful guardians of the soul.

Laughter is God’s gift to the human being. Like the gift of tears it is what makes us human. Animals don’t laugh and cry. Apes grunt but they don’t guffaw. Wolves howl and owls hoot, but not with laughter.

Laughter lightens and enlightens the soul.

Where the Spirit is, there is life and joy. If our Catholic faith does not evidence joy, then something is seriously wrong. Laughter that is natural spontaneous, innocent and fresh is childlike, pure and close to God.

Let’s get theological. If we’re created in the image of God and we are able to laugh, then does God laugh? I’m convinced of it. I think he sees the whole cosmic joke and instead of seeing him only as the sober and awesome God of the Universe it doesn’t do us any harm to also see him as a King of Comedy–I’m seeing an everlastingly  burly Burl Ives or the good man John Goodman, the chuckling Chesterton or the sweet John Candy. Jolly Jehovah, the Lord of Laughter, the Creator of Heaven and Earth and the Almighty Master of Mirth  Continue Reading