The Most Revealing Trump Moment…

The Most Revealing Trump Moment… 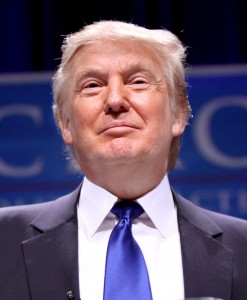 …at Saturday’s debate I saw the most horrible Trump moment.

It was not his vulgarity, his coarse language, his sexist attacks, or his crude aggressive name calling.

It was not his lies, mendacity, manipulation and innate dishonesty.

It was not his fake tan, fake teeth, fake hair and fake face.

It was not his history of buying politicians, scheming to grab property from old ladies, planned bankruptcies and running casinos.

It was not his bragging, racism, boasting and megalomania.

It was that little question thrown at him which turned out to be a curve ball.

The question was something like, “Who in your life is able to challenge you and say you are wrong? From whom do you take criticism?”

He hemmed and hawed after saying weakly that his wife tells him when he’s wrong. He then went on to his usual line about how he is a winner, he is a billionaire. He is a successful businessman.

This, combined with his admission that he has “never said sorry to God” and “never apologized for anything” shows the true heart of darkness in Donald Trump.

Standing on My Head