The Pope, the Prince and the Pauper

The Pope, the Prince and the Pauper 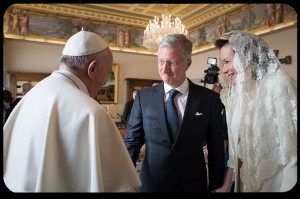 My latest article for Aleteia reports on the universal appeal of the Catholic Church and the papacy.

The extent of the pope’s reach was re-affirmed recently as he welcomed King Philippe and Queen Mathilde of Belgium. At fifty-four Philippe is one of Europe’s youngest reigning monarchs. He ascended the throne in 2013 after the abdication of his father, King Albert II. A fighter pilot, parachutist and commando, he attended the Belgian Royal Military Academy followed by Trinity College, Cambridge, and finally took an advanced degree in political science from Stanford University.

In a serendipitous connection that Vatican watchers get used to, the recent visit of King Philippe and Queen Mathilde of Belgium coincided with the “visit” of another Belgian to the Vatican. Willy Herteleeter, who was over eighty years of age, was a homeless man in Rome. Well known to the Vatican staff and residents of the Borgo—the narrow streets outside the Vatican—Willy attended mass at 7 am every morning in the Church of St. Anne just inside the Gate of St. Anne.

We sometimes take for granted the power and influence of the papacy. Pope Francis really is the only global religious leader of any stature. I can’t think of any other religious leader that garners more attention and respect. The Dalai Lama operates on a global stage. The Archbishop of Canterbury has a global reach, but there is an interesting story of Archbishop Robert Runcie on a trip to Africa when Pope St John Paul the Great was also visiting. Their mutual support teams arranged an impromptu meeting between the two. Runcie observed later that he wished he had a support team like the pope’s. He realized that he was small fry compared to the massive crowds greeting the pope and his universal acclaim.

At the same time the pope takes time to have breakfast with tramps, provide showers and toilets for the homeless and do prison work. Amazing.

Go here to read the full article about the pope of princes and paupers.