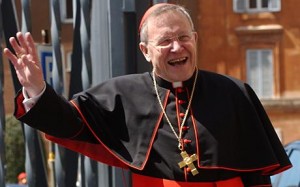 Let’s face it, the aged Cardinal Walter Kasper is a modernist of the old school. He doesn’t believe in friendly ghosts.

It’s a pretty good story–worthy of any thriller that begins, “It was a dark and stormy night…”

Is it a friendly ghost? It’s not a ghost, but it’s friendly. It’s the Lord. He’s walking on the water and coming to them on the waves.

Cardinal Kasper doesn’t think it really happened. This excellent article highlights Kasper’s interpretations of the miracles in the gospels. Before discussing Cardinal Kasper’s views let’s be reminded of the church’s formal teaching on the question of the historicity of the gospels:

The Church has been abundantly clear in its teaching regarding the inerrancy of Sacred Scripture. Pope Leo XIII solemnly taught that “it is absolutely wrong and forbidden, either to narrow inspiration to certain parts only of Holy Scripture, or to admit that the sacred writer has erred.” This teaching was repeated by the Second Vatican Council, particularly in reference to the historical reliability of the Gospel accounts.  In its declaration on the Sources of Revelation, it decreed:

“Holy Mother Church has firmly and with absolute constancy held, and continues to hold, that the four Gospels just named, whose historical character the Church unhesitatingly asserts, faithfully hand on what Jesus Christ, while living among men, really did and taught for their eternal salvation until the day He was taken up into heaven.” (Dei Verbum, 19)

“A number of miracle stories turn out in the light of form criticism to be projections of the experiences of Easter back into the earthly life of Jesus, or anticipatory representations of the exalted Christ. Among these epiphany stories we should probably include the stilling of the storm, the transfiguration, Jesus’ walking on the lake, the feeding of the four (or five) thousand and the miraculous draught of fishes. The clear purpose of the stories of the raising from the dead of Jairus’s daughter, the widow’s son at Naim and Lazarus is to present Jesus as Lord over life and death. It is the nature miracles which turn out to be secondary accretions to the original tradition.

“The result of all this is that we must describe many of the gospel miracle stories as legendary. Legends of this sort should be examined less for their historical than for their theological content. They say something, not about individual facts of saving history, but about the single saving event which is Jesus Christ. To show that certain miracles cannot be ascribed to the earthly Jesus does not mean that they have no theological or kerygmatic significance…The probability is that we need not take the so-called ‘nature miracles’ as historical.” (Jesus the Christ, p. 90-91)

On the other hand, to be fair, a reader has informed me of a kind of recantation on the part of Cardinal Kasper. In a footnote to a new edition he writes,

In the three decades since the first publication of Jesus the Christ many questions and many particular answers have changed.  For in the meanwhile, exegetical and historical research has of course not stood still [9].  If Jesus the Christ were to be revised in this light, we would have to include a great deal of literature from this later research, to examine and amplify countless exegetical and historical details and also correct many of them [10].  This alone would be too much for the time available to me and exceed my powers, since I have been called away from academic work into  ecclesiastical responsibilities, which require my complete commitment. “–Jesus the Christ:  New Edition pg ix

In addition a footnote  (on page xix) says “In retrospect today, particularly on the question of the nature miracles, I would give a more positive judgement than I did in Jesus the Christ.  The meaning of the Son of Man title also needs revision.”

In the original no explanation was given as to why we should dismiss the transfiguration, the walking on the water, stilling the storm, raising the dead, draught of fishes, feeding of the five thousand. No textual criticism or historical criticism to support his case. Instead he sees that there are theological points to be made by the stories and concludes that the stories were no more than fabricated fables.

While Cardinal Kasper may have come up with a “more positive judgement” over the years this remains an issue amongst similarly modernist scholars.

If there is a theory that the miracles stories were “projections of the experiences of Easter back into the earthly life of Jesus” where is the evidence that early Christians did that sort of thing? Do we have other documents from the first century that show this sort of thing happening?