The Reliquary of the Magi

The Reliquary of the Magi 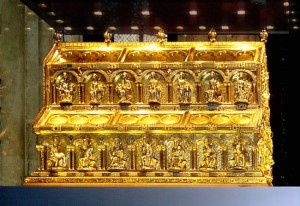 Reliquary of the Magi, Cologne Cathedral

The relics of the Magi–Balthasar, Melchior and Caspar are said to reside in this reliquary at Cologne Cathedral in Germany.

How did they get there?

The relics were first kept at Constantinople and translated to Milan in the mid fourth century. The Holy Roman Emperor Frederick Barbarossa moved them to Cologne in 1164. They’ve been there ever since.

The reliquary was opened in 1864. Here’s what was inside:

“In a special compartment of the shrine now there showed – along with remains of ancient old rotten or moulded bandages, most likely byssus, besides pieces of aromatic resins and similar substances – numerous bones of three persons, which under the guidance of several present experts could be assembled into nearly complete bodies: the one in his early youth, the second in his early manhood, the third was rather aged. Two coins, bracteates made of silver and only one side striken, were adjoined; one, probably from the days of Philipps von Heinsberg, displayed a church, the other showed a cross, accompanied by the sword of jurisdiction, and the crosier (bishop’s crook) on either side.”

Are the relics genuine? There is so little we can confirm about the Magi themselves that it would be difficult to establish much about the bones, but at least we can say that they are very ancient relics that have been venerated as the bones of the magi from the mid fourth century. That gives them pretty much Wow! factor simply as historical and archeological artifacts. The Monastery of St Paul on Mt Athos claims to have remains of the three gifts.

Do relics matter? They matter because matter matters. History matters. The incarnation of the Son of God means that the source of Goodness, Truth and Beauty took human flesh at one place in one time in human history. So the stuff of history matters, and even if the relics are not genuine, they are at very least, reminders that the reality of the physical world has eternal significance.

Go here for an apologetics piece on relics. To learn more about who the Three Wise Men were and where they came from read this post.