The Satanic Coloring Book for Kids?

The Satanic Coloring Book for Kids? 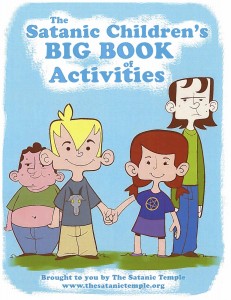 Last week a book arrived on my desk which is truly disturbing.

Produced by The Satanic Temple it is an eight page booklet featuring typical kid’s coloring book with activities like a maze, word search, puzzles and codes.

What interests me most about The Satanic Children’s Big Book of Activities is the approach the authors use. On page one there is a “find the difference” puzzle and the child is to help a little girl named Annabel to “dispel fear and ignorance by demonstrating Satanic rituals for her class.” Annabel is a cheerful little tyke with a pentagram on her robe and she’s officiating at a Satanic ritual in school.

On other pages Annabel and her friend Damian have to counter some “bullies” who are “mad and afraid of things they don’t understand”. Annabel has cosy a study “filled with Satanic literature and philosophy” and later they encounter a big, fat, ugly boy with pimples who is “sometimes scary because he has trouble saying what’s on his mind.” Damian and Annabel have to “use their patience and open mindedness” to help him. Elsewhere the kids learn to draw pentagrams which reflect the goat’s head they go on a trek through a “dark, dank labyrinth” with Cerebrus–the hound of hell–who is portrayed as a cute puppy.

My first thought when I saw this document was that it was a piece of satire. Nope.

It’s serious. The Satanic Temple “facilitates the communication and mobilization of politically aware Satanists, secularists, and advocates for individual liberties.” They portray themselves as a civic minded organization fighting against cruelty and injustice:

The mission of The Satanic Temple is to encourage benevolence and empathy among all people, reject tyrannical authority, advocate practical common sense and justice, and be directed by the human conscience to undertake noble pursuits guided by the individual will. Civic-minded, The Satanic Temple has been involved in a number of good works including taking a stand against the controversial and extremist Westboro Baptist Church, working on behalf of children in public school who have been subject to corporal punishment and more.

Notice how they wish to use the language of American “liberty” and “civic concern” for kiddies who have been hurt to promote their cause.

With an aggressive pro-abortion public policy, this organization uses all the language of the equal rights movement, portraying Satanists as another poor, misunderstood minority group. Surrounded by “bullies and haters” the Satanists are “advocates for individual liberties.”

This makes sense since the Satanist creed is “Do what you will.” Where does this lying lunacy lead? Continue Reading