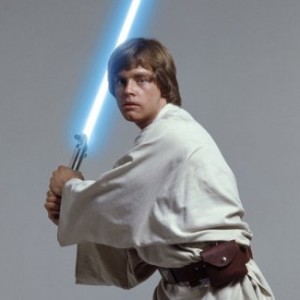 The aficionados of the Star Wars movies are religious in their passion for the films. I realize it was a spoof, but in 2012 the census in the UK reported that “Jedi Knight” was listed as the seventh most popular religion under the “other religion” category. Go here to learn more about the Jedi religion in Britain…

The Star Wars films are uneven in quality, but the reason they work so well overall, and the reason they were revolutionary in the 1970s was because George Lucas was the first film maker to consciously understand the dynamic of mythic storytelling.

He had been influenced by mythologist Joseph Campbell–author of The Hero with a Thousand Faces  Campbell’s book charted the outline of the classic hero’s quest–theorizing that all myth followed the same basic structure in which the hero launches out from his ordinary world and enters a world of adventure to gain some great prize and subsequently learn about himself and the meaning of life and so become a great hero.

When done well–as it is in the original Star Wars trilogy, the hero’s quest unlocks the meaning of life and the spiritual dimension for the members of the audience. As they go on the quest with the hero the identify with him and so encounter the same obstacles, ask the same questions and face the same moral dilemmas.

This was brought home to me as I studied script writing. The teacher explained how the climax of the movie is the point where the physical  plot line and the inner, spiritual plot lines converge to bring about a terrific “aha!” moment. He explained that he went to see Star Wars in a large London cinema seating several thousand.

In Star Wars the crucial moment is when Luke is piloting his fighter plane down the canals of the death star, attempting to drop a bomb down a ventilation chute to destroy the death star. He only has three bombs and the first two tries have missed.

The villain Darth Vader is coming in behind him to shoot him down. He is relying on his autopilot to help him hit the target as he goes in for his third and final attempt.

Then the voice of his mentor Obi Wan says in his mind and heart, “Use the force Luke.” Luke struggles against this advice. He has to use the force and not his man made technology. But the technology has already failed him twice.

As the music surges he pushes the autopilot visor away and “Uses the force”. He presses the trigger, the bomb drops and hits the target and the battle is won.

At that point, the teacher said, 3000 people in the cinema stood up and cheered.

They cheered because Luke used the force.

At that moment, the teacher explained, 3,000 people said in their heart of hearts, “I believe there is good and evil in the world. I believe that good can win. I believe that we identify with the good through spirituality and religion.” Furthermore, by their cheer they also affirmed, “I want to fight on the side of good against evil. I want to use the force. I want to be a good and noble hero like Luke Skywalker.”

Of course all this happened below the surface.

People didn’t walk out of the cinema that night saying, “You know at the climax of that movie I had a profound spiritual and transcendental experience.” It was deeper than that, and all the stronger for the fact that it occurred at a deep level of consciousness.

Christian members of the audience might be nervous that the spirituality in Star Wars is a miss mash of Eastern mysticism and subjective emotionalism. They should stop being worried. The films were never intended to be Christian sermons, but to appeal to a much deeper, universal strand within human consciousness. By allowing the religious dimension to remain vague and “spiritual” the films work on a universal level for people everywhere.

What is the secret of Star Wars’ success?

It is the fact that George Lucas was brave enough to include a spiritual heart to the film series. The seemingly ordinary adventure movie suddenly has real depth, emotion and this is why it has the power to move the hearts of millions.