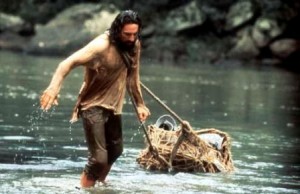 Saved from Sacrifice: A Theology of the Cross

by S. Mark Heim is a fascinating exposition of the thought of Rene Girard to the theology of the atonement or “what really happened when Jesus died on the cross. I’m reading it as part of my research for a book I am working on called The Sacred Sacrifice which will be an explanation and expansion of Girard’s thought for a popular audience.

Toward the end of the book Heim meditates on an element of Anselm’s thought on the atonement, and records this dialogue in Anselm on the need we have not only for forgiveness, but for participation in forgiveness.

Anselm: But suppose it were true that God forgives him who does not pay what he owes, because he cannot

B: That is what I should wish

B: Nothing is clearer than this

A: But if he is either in need or unjust, he will not be blessed

An example will clarify: Let us say that Johnny throws a baseball through old Mrs Brady’s window. He is very sorry for having broken the window and he apologizes to Mrs Brady. She is a nice, rich old lady, and not only forgives Johnny, but can pay to have the window repaired. Johnny has no money and cannot pay for the window to be repaired.  But if Johnny is really sorry and is a good boy he would want to pay for the repair of Mrs Brady’s window. His own virtue has made him unhappy. If, however, he does not want to pay for the window then he is not virtuous after all.

This is the reason for penance and purgatory.

After genuine repentance the soul is completely forgiven by God unconditionally. However, the price for the sin must still be paid and this is where penance and purgatory come in.

I cannot forget the scene from the film The Mission in which the slave trader Roderigo, played by Robert deNiro, is given the penance of lugging his weapons and the tools of his slave trading on the long journey up the waterfall to the settlement of the aboriginals. In his violence and lust he has killed his own brother… Continue Reading