The Shroud and the High Speed Train

The Shroud and the High Speed Train 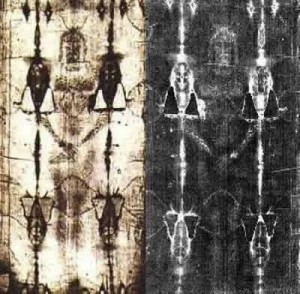 My latest article for National Catholic Register explains how the advance of technoscience has provided the means to move close than ever to authentification of the Shroud of Turin.

The article was written on a high tech, high speed train whizzing through Italy from Rome to Turin…and it got me thinking.

The shroud lay virtually unknown for 1,900 years and would have been dismissed as a grubby medieval forgery if it hadn’t been for the advances of modern technoscience.

The shroud’s first encounter with the technology of the modern age was when it was first photographed by Secondo Pia in 1898. Pia was astounded, when he developed his plates, to discover that his photographic negative was actually a positive image of a man’s face. That meant the image on the shroud was, in effect, a photographic negative.

However, it was not just a photographic negative. The unique qualities of the shroud image were confirmed in 1976, when a photograph of the image was put into a VP-8 Image Analyzer — a gadget that transforms the lights and darks in images to three-dimensional forms. An eerie 3-D image of a man’s face emerged — something that the gadget cannot produce from photographs or paintings.

“This spatial data encoded into the image actually eliminates photography and painting as the possible mechanism for its creation and allows us to conclude that the image was formed while the cloth was draped over an actual human body,” according to Barrie Schwortz, an internationally recognized authority on the shroud. “So the VP-8 Image Analyzer not only revealed a very important characteristic of the shroud image, but, historically, it also provided the actual motivation to form the team that would ultimately go and investigate it.”

The amazing discovery of the three-dimensional image prompted a team of scientists to conduct the most extensive research on the shroud in 1978: Sturp (the Shroud of Turin Research Project). The scientists spent two years preparing to conduct the tests and more than 120 hours rigorously examining the scientific qualities of the shroud.

The great irony is that miracles are discounted in this doubting age in love with technoscience, but it is the technoscientific advances that have allowed us to understand how truly amazing the Shroud of Turin really is.