Thoughts on the Presentation of Christ

Thoughts on the Presentation of Christ 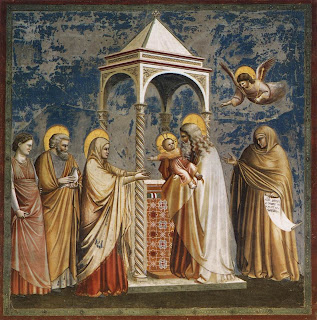 The Presentation of Christ has always seemed to me a minor feast, a hidden little gem if you like. Isn’t that in keeping with the mystery itself? The Jews, and everyone else for that matter, want their Messiah to come sweeping in on clouds of glory. Corinthian pillars, sweeping searchlights, the sound of trumpets and riding on a white horse.

Behold the Lord will come to his temple, but look how he comes: just another peasant with his wife and their first child. Standing there in the line with all the other simple people who have come with their two turtledoves. Just another mother with just another child, coming to do her religious duty and present her son at the temple.
Only old Simeon and Anna had the eyes to see. They who dwelt in the temple following the contemplative life. They are the ones who could see. The mystics, the hermit, the one who spends time in adoration. They are the ones who have eyes to see that the Messiah of the masses is never the true Messiah. Instead he comes as a little one, a hidden one.
He comes as a mystery to the world of men. As in the gospel, when he walked on the water, it says that ‘he would have walked past them in the night.’ He comes as a slip of a child and nearly slips by you, unless you have eyes to see, and still he comes in the same way–in the hidden ones he lies hidden. By being concealed he is revealed.
PatheosDwight2009-02-02T18:08:00-04:00February 2nd, 2009|Categories: Patheos|2 Comments