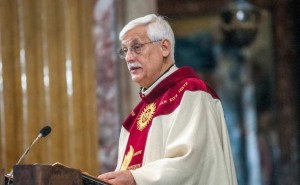 The term “Jesuitical” was rooted in the Jesuits’ reputation during times of persecution for prevarication. They became experts in saying one thing and meaning another.

It seems their reputation for intentional ambiguity, “nuanced” language and communication that resembles a smoke and mirrors conjuring act is stronger than ever.

I’m not a fan of LifeSite News, but they report here an interview with top Jesuit Fr Arturo Sosa Abascal in which he states that Jesus’ teaching on divorce and re-marriage is “relative” and “subject to interpretation. I am reluctant to post about this because so much of the “news” on the internet turns out to be biased or slanted, but this item seems bona fide.

Here are some excerpts from the interview first published in Italian at the blog Rossoporpora with the relevant parts here.

Q: Cardinal Gerhard L. Műller, prefect of the congregation for the doctrine of the faith, has said with regard to marriage that the words of Jesus are very clear and “no power in heaven and on earth, neither an angel nor the pope, neither a council nor a law of the bishops has the faculty to modify them.”

Abascal: So then, there would have to be a lot of reflection on what Jesus really said. At that time, no one had a recorder to take down his words. What is known is that the words of Jesus must be contextualized, they are expressed in a language, in a specific setting, they are addressed to someone in particular.

Q: But if all the words of Jesus must be examined and brought back to their historical context, they do not have an absolute value.

Abascal: Over the last century in the Church there has been a great blossoming of studies that seek to understand exactly what Jesus meant to say… That is not relativism, but attests that the word is relative, the Gospel is written by human beings, it is accepted by the Church which is made up of human persons… So it is true that no one can change the word of Jesus, but one must know what it was!

This is astounding. Let’s be clear. While Fr Abascal thinks Jesus’ words are difficult to understand, Fr Abascal’s are easily understood. He is saying that we can’t really know what Jesus’ words were so it is all up for grabs.

Q: So if conscience, after discernment, tells me that I can receive communion even if the norm does not provide for it…

Abascal: The Church has developed over the centuries, it is not a piece of reinforced concrete. It was born, it has learned, it has changed. This is why the ecumenical councils are held, to try to bring developments of doctrine into focus. Doctrine is a word that I don’t like very much, it brings with it the image of the hardness of stone. Instead the human reality is much more nuanced, it is never black or white, it is in continual development.

That other “top Jesuit” was also speaking about “black and white and grey areas last week.” I wrote about this intentional ambiguity among the Jesuits at CRUX here, and commented about the “grey areas”.

That Pope Francis is ignoring the clear questions he was asked, and continues to sidestep his responsibility as Supreme Pontiff to clarify the true teachings of the Church, is only making matters worse.

His encouragement to embrace “grey areas” in a recent address to religious superiors is worrying. Grey is only possible because there is such a thing as black and white. Pastors can only grapple with the grey areas when they have the black and white guidelines to do so. We can only wrestle with the subjective realities if we have clear, objective teaching as a rule and guide.

I have compared Catholic liberals to Anglicans in the past and people get all nail-bitey about it. I’m being” harsh.” I’m being “judgmental.”

I’m not actually. I’m simply reporting what it was like as a Church of England priest in the early 1990s. I remember a clergy meeting in which we were discussing evangelization. The priest of the next door parish said, “I wouldn’t presume to tell my people what might be right for them spiritually.”

At which point the Rural Dean nodded and said, “That’s right. Because there is no such thing as objective theology.”

And the plot thickens. CRUX editor Ines San Martin asked communion for divorced and remarried advocate Archbishop Coccopalmerio whether the same approach to communion after “careful discernment” might apply to homosexual couples who also found it “impossible to refrain from sexual relations.”. The incoherent answer is here.

The fact of the matter is, all pastors understand that in practice it is not easy to apply the strictures of our faith. But we don’t get rid of them because they are difficult to apply, nor do we spit out theological double talk to explain them away.

We uphold the timeless teachings of our faith with clarity and we then struggle to apply them with charity.