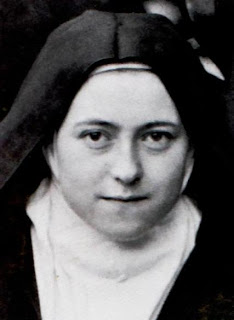 Therese once said, “I believe I am humble.”

I was speaking at a conference on the saint when someone asked the obvious question, “How could she have said, ‘I believe I am humble?’ Surely if you think you’re humble, you’re proud, and therefore you’re not humble, and you’re certainly not a saint.”

The answer comes in discovering where and when Therese said this. She said it on her deathbed the day she died. She had suffered in cheerful fortitude for months with the terrible disease of tuberculosis–literally coughing up bits of her lung until there was nothing left. All this in a particularly hot summer. In addition to her illness, she had been in a spiritual darkness for years in which she felt totally abandoned by God. She was even tempted to suicide–so deep was her desolation and so dark was her ‘dark night.’

At that point, the poor girl, only 24 years old, with no lungs left, gasped out. “Yes, I believe I am humble.”

I’m speechless at it all, and at Mass today, was quite moved. It is my first time to celebrate Mass on the Memorial of this saint who is so very special to me. I think it is her prayers that have allowed for the ‘miracle’ of my being a Catholic priest. When I first met her at Lisieux as a young Anglican priest (and learning that she prayed for priests) I said to her, “Maybe you will pray for me, even though I am not a full member of your family, and maybe one day I could even be one of your priests.”

Now, twenty years later I am not only a Catholic, but a Catholic priest.

Excuse me for a moment while I wipe my eyes…

Anyway, here’s the link to an article I wrote about Therese for Touchstone magazine some years ago.