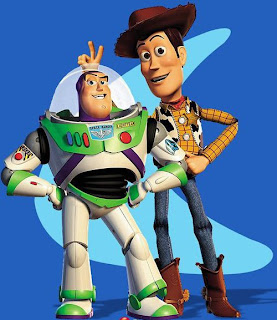 I’m pretty hard on movies. Having trained as a scriptwriter and written dozens of film reviews I get tired of the formulaic scripts, the stock characters, predictable plots and the over reliance on whizzbang special effects and technological fireworks.
My kids haul me off to some movie and I’m usually disappointed. Not with Toy Story 3. You remember Toy Story was the first ever big time computerized animated feature. We met Woody and Buzz and the rest of they toys as well as their boy Andy. The sequel was just as good as the first film, but the characters and situations were getting, well, stretched to the limit.
I wondered if the genius folks at Pixar could pull off another Toy Story film successfully, but Toy Story 3 is brilliant. I’d say it is even better than the first two. It’s been eleven years since the sequel and so, of course, Andy is grown up and about to go off to college. He still has his toy box full of toys and we meet the gang plotting to get his attention so he will play with them again. After a few adventures they end up being donated to Sunnyside Day Care where they look forward to being played with by many generations of kids. Unfortunately the place is run by a genial Big Daddy Burl Ives type bear who turns out to be a nasty piece of work. He’s aided by some monster toys, a creepy big baby with a loopy eye and Barbie’s Ken who tries too hard to be a tough guy.
The movie then turns out to be a prison break caper with lots of visual jokes referencing famous prison movies. Like the first two films, this one is packed solid with slapstick, wise cracks, action, visual jokes, references to other films and it is all driven by an expertly detailed script that keeps you hanging and wanting more. Then they deliver more: after a tear jerker ending the credits roll with more comic clips that keep you laughing.
I always try to put in a film review the down things about a movie. I can’t think of any.
If you’re going to see a movie this summer go see Toy Story 3. For a Father’s Day treat we saw it in 3-D at the local IMAX. It cost a lot, but I’d go again.
PatheosDwight2010-06-20T14:15:00-04:00June 20th, 2010|Categories: Patheos|0 Comments