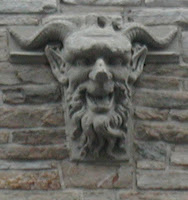 Another of the devil’s tricks in our contemporary world is utilitarianism. This is the belief that if something works it is right. Now, of course there is nothing wrong with liking things to work, and efficiency and practicality are all virtues. The problem (as in all heresies) is when this virtue is elevated above all others.

Utilitarianism comes in all sorts of forms. It is argued that women should be priests because they would be good at it. It is argued that it doesn’t matter if a person is divorced and remarried or in some sort of immoral relationship. What a person does in their bedroom (the utilitarian argues) doesn’t affect what they do in the boardroom. How a person behaves in the play place should not affect how they behave in the workplace. When utilitarianism is exalted above all the other virtues all the other virtues disappear.
The ultimate effect is that both personal decisions and public policy are decided on ‘what works’. Consequently the most horrific things can take place and the utilitarian closes his ears to the screams, turns his eye from the horror and says, “Yes, but it works. Auschwitz and abortion were promoted because they seemed to provide an effective solution to a perceived problem. Euthanasia is the ultimate utilitarian solution.
Not only the greatest horrors, but the greatest tyrannies are brought about by utilitarianism. If you object to the utilitarian solution for religious or moral or personal reasons you must be elimminated in whatever way possible. This is not because the utilitarian is cruel, but because he is efficient. Getting rid of the opposition ‘works’ that’s all.
Finally, perhaps utilitarianism’s greatest evil is not that the utilitarian imposes solutions that work, but that they impose solutions that they believe will work. Solutions that are devised from ideological, religious, political or social theories are imposed on other people. When the solution fails to work the utilitarian never stops to question his ideology, he simply imposes more of the same solution which he really believes should work. Universal sex education for teenagers is a utilitarian solution for the problem of teen pregnancy. When it doesn’t work they simply do more of the same.
Thus the final irony is that the utilitarian, who only wanted to do what works, not only ends up doing what doesn’t work, he does it over and over and over again.
When you see the results of this you know that it is not only a trick of the devil, it is a sign of insanity.
PatheosDwight2009-08-12T12:31:00-04:00August 12th, 2009|Categories: Patheos|0 Comments