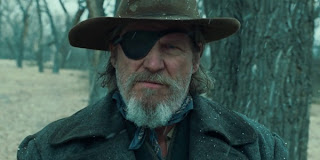 I’m a fan of the Coen brothers and their movies keep getting better and better. Their love of the wide vistas of the American West put them in the great tradition of director John Ford, who captured the wide and wild spaces of the West as a kind of metaphor for the American spirit.

Jeff Bridges portrayal of Rooster Cogburn –which was John Wayne’s greatest role–is fantastic. Bridges ‘cool’ persona has roughened with age and he is now the perfect actor to communicate the tough killer whose heart is won over by a fourteen year old girl every bit as tough as he is. True Grit is a truly gritty movie with crazy criminals, murderous mountain men, renegade rustlers and an unforgiving winter landscape. In this movie bleak is beautiful, and it is the bleak interior landscapes of the human heart mirror the bleak and wild places pictured in the film. True Grit is one of the great movies of the last year, and for those who like their movies to have meaning, as usual, the Coen brothers eschew preachy morality and leave you with ordinary people facing tough decisions in a wicked world that demands not only good ideas, but good decisions and good actions.

In addition, as in most of their films, the movie is laced with startling visual images, settings and backgrounds that evoke a strangeness which points beyond the ordinary world to some unseen, unspoken world beyond. In True Grit there are fires and darkness, cliffs and caves, and serpents and saviors. Like the world in which we live, the world of the Coen brothers reeks with symbols that are never specified and hints which are never spoken.The players enact their roles within a vivid realm that is far greater than they can see, and so gives each of their words and actions a greater meaning.

What I also like about the Coen brothers is that their heroes are often eccentric anti heroes. In a true American style they like the outrageous outcast, the eccentric expert, the lonely genius, the romantic fool or the courageous clown.  They uphold the common man against the establishment elite, the ordinary man in the face of outlandish wickedness or smooth establishment hypocrisy. As such they inspire and encourage every outsider who longs for greatness–every outcast who has a heart of genius and every romantic fool who loves beauty, truth and goodness.