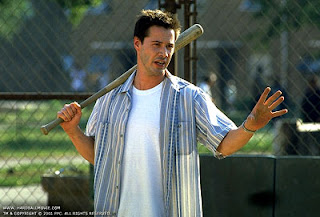 If you want to see a truly Catholic movie watch Hardball with Keanu Reeves. It’s not about a saint. It’s about a sinner.

Reeves plays Connor O’Neil, a young guy with just about every problem you can get: unemployed, gambling addict, drink problem, drugs problem, truth problem…you name it.

To avoid the guys with the baseball bats who are threatening to do some instant orthodontics, Connor takes a job coaching a little league team in the projects. Eventually he learns some responsibility, some self respect and pride. He finds redemption.

Why do I think this is such a Catholic movie? Well to start with, it’s loaded with Catholic imagery. In the first scene we see Connor stumble into a beautiful Catholic Church swilling drink. He collapses into a pew and starts to pray. We see the church, we see a crucifix, we see a close up of the Divine Mercy. Then a priest asks Connor if he is seeking forgiveness. Connor says he is just asking for enough money to pay the bookie.

From there things look up. Connor is offered a way out coaching the team. Later, just as the plot turns there is a wordless scene where we see Connor in his room in front of the mirror. He’s looking hard at himself. On the dresser in front of him is a statue of Our Lady of Lourdes. He thinks for a moment, then takes the miraculous medal from around the statue and kisses it, puts it on, then dons his shades and exits. Not a word, not a sermon, but a clear indication that Connor has returned to his faith.

The other, truer and deeper reason, this is a Catholic film, is that the truth is incarnated fully. There’s no sermon tacked on the end like a little moral. There’s no scene where the screenwriter feels obliged to put his sermon into the mouth of one of the characters. Instead we see Connor working out his salvation in fear and trembling. We see him make mistakes and finally triumph.

I won’t give it away. If you don’t know this little film get it. In my opinion it ranks right up there with Shawshank Redemption, Saving Private Ryan and Babette’s Feast as a film that incarnates the eternal Christian truth.