Twelve Reasons Why I Never Argue With Internet Atheists

Twelve Reasons Why I Never Argue With Internet Atheists 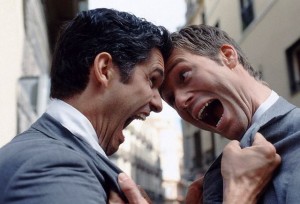 Some atheists trying to pick a fight with padre, but I never argue with atheists

1. Most of the internet atheists I’ve come across are ignorant – I don’t mean they’re stupid necessarily, or that they are bad people. I don’t even mean they are uneducated in their particular field, but most of them are ignorant when it comes to religion. By this I mean they just don’t know stuff. I don’t blame them for that, I’m ignorant about rocket science, how to do a brake job on a car, the rules of cricket and micro biology and a pile of other stuff. However, religion is one of the areas I do know something about so it’s difficult arguing with people who think they know it all about religion, but don’t.

3. Arguing religion doesn’t work – This is also why I don’t argue with Protestants, Buddhists, Mormons, Seventh Day Adventists and Moonies or members of the Church of the Four Square Gospel of the Sixth Revision. For a person to understand and connect with religion they have to go on an honest search themselves and really seek the answers. “Seek and you shall find” and all that. Arguments don’t really fit with that model. However, if a person–any person is an honest enquirer and wants to learn more about religion I’ll spend all the time in the world trying to point the way.

4. There are better debaters out there – Sometimes argument works for some people if they are really searching for an answer and want to have an honest discussion. I think there are many good natured atheists out there who do want to argue in an open minded and intelligent fashion. They should connect with a website like Strange Notions run by my friend Brandon Vogt. He’s set up an excellent site where people can conduct good tempered, rational conversations about God and religion.

5. I’m not that convinced about the usefulness of the “arguments” for God – Sure, I know the arguments and can explain them if I need to, but the whole religious-God thing is so much larger than intellectual arguments. For me it’s a bigger adventure and a grander love affair. The arguments for the existence of God boil the whole thing down to an intellectual game and I find that unsatisfying. It’s kind of like arguing about the existence of music. I’d rather listen to the symphony and invite another person to join me.