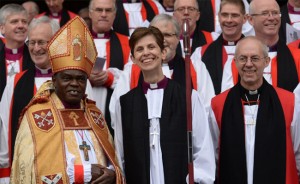 The feminist Anglicans have unveiled their latest campaign.

Now that they’ve succeeded in getting women ordained as priests and bishops they’re pushing for the language of the liturgy to be changed to call God “Mother.”

Here are twelve reasons why you can’t call God “Mother”

1. Jesus tells us to call God “Father” – The really big reason comes first. Jesus himself tells us to call God Father. Of course the feminist activists don’t take something like the Bible or even the words of Jesus seriously. They’ve stopped believing in something so “fundamentalist” as the authority of Scripture long ago. They regard the New Testament as “an interesting first century Jewish document” which was, of course, conditioned by the patriarchal culture of its time. Jesus–for all his beautiful teachings and fine example–was also hopelessly conditioned by his own time period. That was then. This is now. We can change all that.

2. The Old Testament refers to God as Father – From paragraph 238 of the Catechism: Many religions invoke God as “Father”. The deity is often considered the “father of gods and of men”. In Israel, God is called “Father” inasmuch as he is Creator of the world. Even more, God is Father because of the covenant and the gift of the law to Israel, “his first-born son”. God is also called the Father of the king of Israel. Most especially he is “the Father of the poor”, of the orphaned and the widowed, who are under his loving protection.

3. The Liturgy Calls God “Father” – We believe what we pray. We pray what we believe. To tinker with the liturgy is always to tinker with what we actually believe. When we start calling God “Mother” people will start believing God is their Mother not their Father. Of course, the feminists know this. That’s exactly why they want to change the liturgy. They want to change the Bible too. There is already an “Inclusive Bible” Go here.

4. The Catechism explains why we call God Father and how this includes the mothering attributes of God – By calling God “Father”, the language of faith indicates two main things: that God is the first origin of everything and transcendent authority; and that he is at the same time goodness and loving care for all his children. God’s parental tenderness can also be expressed by the image of motherhood, which emphasizes God’s immanence, the intimacy between Creator and creature. The language of faith thus draws on the human experience of parents, who are in a way the first representatives of God for man. But this experience also tells us that human parents are fallible and can disfigure the face of fatherhood and motherhood. We ought therefore to recall that God transcends the human distinction between the sexes. He is neither man nor woman: he is God. He also transcends human fatherhood and motherhood, although he is their origin and standard: no one is father as God is Father.

5. Calling God “Mother” and “Father” is confusing – Our world is confused enough about gender right now. Calling God both Mother and Father makes God some kind of transgendered being. Nope.