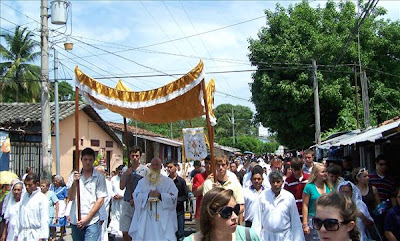 This Spring and summer I’ve had some wonderful experiences that have confirmed the amazing and beautiful unity of the Catholic Church throughout the world. In the first week of June I led about twenty high school kids on our mission trip to El Salvador. Here’s a picture of me and some of our boys in the Corpus Christi procession through the streets of the little town of La Herradura in the La Paz province of El Salvador. (Here is a gallery of photos from the whole trip) There we were, working with the poor, meeting an beautiful nun from India who belongs to the Missionaries of Charity, or a priest from Spain called Padre Pepe who works with the gangs in the inner city.

We were one in Christ because we were one in the Eucharist and one in our loyalty to the Holy Father. Then at the end of June I travelled up to Brooklyn to take part in a Pro Life prayer group. It was a Polish parish with two priests from Poland. One told me how he was persecuted under the Communists and escaped, first to Canada, and then to the USA. The prayer group was led by a couple of Italian Americans with a big family and a big heart. Part of the evening was the chance to venerate the relic of Padre Pio.

Once again, we were one in Christ, on in the Eucharist, on in our loyalty to the Holy Father. This unity was there at a very deep level despite our varied backgrounds. There is more. I come back to Greenville and was asked to cover for Fr Bart Leon, the local Maronite pastor. There’s another experience of unity in diversity. I have the beautiful privilege of celebrating the ancient Maronite liturgy with the Syrians and Lebanese brothers and sisters. That same afternoon I was traveling out on a country highway in South Carolina and took the chance to visit with some of my future Vietnamese parishioners and a connection is made  between us and St Therese, who wanted to be a missionary to Vietnam.

This unity within diversity is something I used to think we had in the Anglican Church. I thought that because we had Charismatics, Evangelicals, Anglo Catholics and we had a world wide communion with many different cultural expressions. However, we did not really have unity because within the diversity there were huge and irreconcilable differences. The only unity we had was a willingness to agree to differ with one another.

The diversity and unity within the Catholic Church is something far stranger and more beautiful and more difficult to describe. This is something I feel passionate about sharing with our Anglican brothers and sisters who are considering the Anglican Ordinariate. Some of them feel they will be gobbled up by the big-ness of Rome. I have found just the opposite. There is an extraordinary amount of freedom within the different expressions of Catholicism. Whether they are religious orders, dioceses, parishes or Eastern Rite Churches, or one day the Ordinariate for former Protestants…within the diversity there is an underlying unity that sets us free.

This summer I have shared at a much deeper level than I have ever thought possible my identification with my fellow Catholics. I was the brother of El Salvadorean peasants, a Spanish priest, an Indian nun, a French Carmelite, an Italian American casino operator, a Polish priest who knew Pope John Paul the Great, a Vietnamese seminarian, an old man from Lebanon, a child from Mexico and American middle class high school kids.

My plea to Anglican Christians is, “Please, be bold. Respond to the Pope’s offer of an ordinariate. Work with us to make this happen, and so join the great family of the Catholic faith throughout the world. Bring Anglicanism with all its riches and traditions and holiness to the great table at the marriage supper of the Lamb. You will not be swallowed up. Instead all the great things you bring into full communion will be amplified, multiplied and made more real, concrete and dynamic in the Lord’s service.