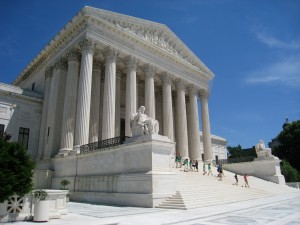 This article from Slate outlines the arguments the 7th Circuit Court has made regarding the employment rights of homosexuals. They have formally equated sex discrimination in the workplace with discrimination against homosexuals.

On Tuesday, the U.S. Court of Appeals for the 7th Circuit issued a landmark decision in Hively v. Ivy Tech holding that Title VII of the Civil Rights Act of 1964 prohibits sexual orientation discrimination. The 8–3 ruling is an extraordinary victory for LGBTQ advocates—an emphatic declaration from a bipartisan group of judges that anti-gay workplace discrimination is clearly illegal under federal law…

…The facts in Hively are straightforward. Kimberly Hively is an openly gay professor who believes that her former employer, Ivy Tech Community College, discriminated against her on the basis of sexual orientation. Hively sued Ivy Tech under Title VII, which prohibits workplace discrimination “because of sex.” A district court ruled against Hively in 2015, concluding that Title VII does not bar sexual orientation discrimination. A panel of judges for the 7th Circuit affirmed that ruling in 2016—but noted that it was only doing so because it was bound by two 7th Circuit precedents from 2000. In a frank opinion by Judge Ilana Rovner, a George H.W. Bush appointee, the majority signaled that it found these decisions dubious and untenable, urging the full court to reconsider them en banc. The court agreed, hearing arguments in November. And on Tuesday, it vindicated Rovner’s concerns, overruling those old precedents and holding that Title VII protects all gay employees.

It is predicted that this decision will make its way to the Supreme Court, but the court’s ruling rested on three arguments. One precedent ruled that employers could not discriminate against an employee because they did not fulfill gender stereotypes. A gay person clearly overturns expected sexual stereotypes and  therefore that previous ruling should apply to them. The second argument is a bit more convoluted. The law says a person cannot be discriminated against because of sex. A woman dating a man or a man dating a woman is a conventional understanding, but a woman dating a woman means the woman was discriminated against because she was a woman. In other words, if she had been a man dating a woman that would not have caused a problem. The third argument goes back to racial discrimination and compares discrimination against a homosexual. A company or institution cannot ban inter-racial dating because their ban is racially based. Likewise, the judges argued, no one can discriminate against a gay person because of the person they choose to date or marry.

The last of the three arguments is very interesting because this is the one where Bob Jones University got stuck. They had a rule banning inter racial dating and their tax exempt status was revoked. They took it all the way to the Supreme Court and lost.

As it happens, when the decision legalizing gay marriage  [Obergefell v Hodges] was being debated the question of how this would impact institutions that did not accept the innovation on religious grounds. Justice Alito actually asked whether approval of same sex marriage would lead to a “Bob Jones situation.”

It is indeed “an issue.”

This article from the Columbia Law Journal argues that the Obergefell decision does not mean that religious institutions that object will lose their tax exempt status, but the recent decision by the 7th circuit doesn’t give any reasons why churches, church schools or religious institutions should be exempt from anti discrimination employment law as they believe it applies to homosexuals.

If a church or church school or Christian institution refuses to hire a gay person will they be prosecuted or sued for sex discrimination?

It will be interesting to see how this one develops.