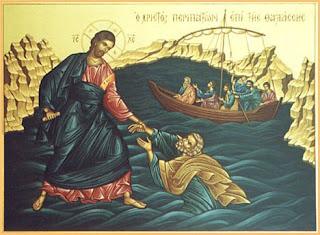 I remember as an Anglican priest being astonished to discover that the story of Jesus walking on the water had been omitted from the Sunday lectionary. The CofE may have put it back in the meantime, but I learned that it was omitted because the story was simply too incredible for modern people to believe. (By the way, the distortion of the faith through the distortion of liturgy within the Anglican Church is a topic that has been much ignored…when I was an Anglican they were doing all sorts of weird things to promote their modernist agenda within and through the manipulation of the lectionary, the prayer book, ‘alternative liturgies’,  the lists of saints etc. but that’s another topic altogether…)


What has always amused me about this blatant historicism is the idea that first century people really had no problem believing the story, or for that matter, for the first nineteen centuries of the church people were so dumb that they thought walking on the water was pretty easy to believe, but suddenly now in the twenty and twenty first centuries we modern people know so much more that we know such things don’t happen.


The other thing that is extremely dumb about the modernists is that the story of Jesus walking on the water comes in Matthew’s gospel right after the feeding of the 5,000. So they take the feeding of the 5,000 and downgrade it by saying “isn’t it wonderful that the example of the little boy sharing his lunch prompted everyone else to share theirs too!” But they can’t really find any way of explaining away the miracle of Jesus walking on the water so they just cut it out altogether. “We now know that such a thing could never have happened, and it will make it so difficult for non-Christians to accept the faith, so perhaps it would be best if we were to simply leave it out of the lectionary–the way we did with that psalm that talks about bashing babies heads against the rocks…”


Here’s why: because Jesus walking in the water is a direct fulfillment of Old Testament prophecies that reveal Jesus to be the Son of God. Consider Psalm 77:

I will consider all your works
and meditate on all your mighty deeds.”
13 Your ways, God, are holy.
What god is as great as our God?
14 You are the God who performs miracles;
you display your power among the peoples.
15 With your mighty arm you redeemed your people,
the descendants of Jacob and Joseph.
16 The waters saw you, God,
the waters saw you and writhed;
the very depths were convulsed.
17 The clouds poured down water,
the heavens resounded with thunder;
your arrows flashed back and forth.
18 Your thunder was heard in the whirlwind,
your lightning lit up the world;
the earth trembled and quaked.
19 Your path led through the sea,
your way through the mighty waters,
though your footprints were not seen.
Or consider Isaiah 43


I am the LORD, your Holy One,
Israel’s Creator, your King.”
16 This is what the LORD says—
he who made a way through the sea,
a path through the mighty waters,


In the Old Testament the Lord God Creator was the one who had mastery over the chaos of the deep. In the creation story he separated the waters above and the waters below. He commanded the flood through which Noah was saved, he opened the waters of the Red Sea to bring the children out of slavery into the promised land. These Old Testament passages from Isaiah and the Psalms reveal the Lord to be the Master of creation, and Christ through both the miracle of the Feeding of the 5,000 and walking on the water reveals himself to be the Creator God.


That this is so is unlocked in the final words of the story: “Those who were in the boat said, ‘Truly you are the Son of God.'” Suddenly the whole thing is very clear–the stories of Jesus feeding the 5,000 and walking on the water are put together by Matthew in the same chapter for a reason. The reason is to attest to the true identity of our Lord as the Son of God.


This shows us the ultimate heresy of the modernists. We thought it was just a dumb and cowardly thing to explain away the miracles. We might have been inclined to excuse it because they were weak in the faith and perhaps a bit embarrassed in front of their intellectual colleagues. But it’s more important than that. In denying the miracles of Christ, they also deny the great miracle, and it is no co-incidence that the same modernist theologians and Bible scholars who deny the miracle of the feeding of the 5000 and seek to eliminate the miracle of Christ walking on the water also go on to deny his divinity.


When is the rest of the Christian church going to wake up and realize that these scholars are not just finding miracles a bit hard to believe–they are actually denying the essential truths of the Christian faith.
PatheosDwight2011-08-08T10:57:00-04:00August 8th, 2011|Categories: Patheos|0 Comments