We Are On the Lord’s Side

We Are On the Lord’s Side 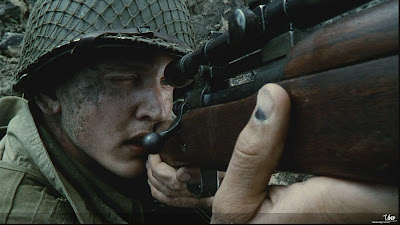 The issue of Jesus guns reminds me of the sniper in the film Saving Private Ryan. The boy is from the deep South and quotes verses from the psalms as he pulls the trigger. “Bless the Lord my Rock, who teaches my hands to war and my fingers to fight.”Click. Bang. Pop goes the weasel.

It has been suggested that gun sights should not feature Bible verses and weapons should not carry religious encouragement.  The gospel, we are told, is all about love. That’s right, and at the end the loving person gets tortured and crucified naked in public, while his buddies deny him, run away and one hangs himself. I’m afraid the the gospel is not all puppies and kittens and Jesus carried me on the beach when I only saw one set of footprints.

The fact of the matter is that as we will always have the poor with us we shall always have the war with us. This being the case, we had better make the best of a bad job and ensure that as much as possible the wars we fight are just and that they are fought in a way that is just and avoids all killing as much as possible. In order to do this the military need to have a set of ethics and rules of engagement. In order to have ethical rules of engagement they need to have ethics and in order to have ethics they need to have a source of those ethics and it doesn’t take too much thought to realize that the source of ethics is the Christian religion.

If there is going to be war, then I would rather have soldiers who had faith and standards of morality and a sense of there being such a thing as right and wrong and justice in the world, and it is Christianity that helps to make that alive and relevant in people’s lives. So Bible verses on weapons therefore makes rather a lot of sense to me. So does lessons for soldiers in ethical standards of warfare, how to avoid killing and how to treat prisoners well. If that is the case then there is a strong argument for considerably more religion in the war place than less.

War without religion would be a far more ghastly business for then there would be no standards of justice, fair treatment and avoidance of killing. Instead the military would go in with massive force and level everything, or as the right wing extremists say, ‘turn the place into a parking lot.’ I don’t pretend that the American military always lives up to this high ideal. Indeed, sadly they do not. I am simply arguing that it is better to have the ideals and the religion from which they spring than not.

Bible verses on weapons may be offensive to some, but this is only because they’ve had a sentimental gut reaction and have been imbibing too much of the liberati (portmanteau word from ‘liberal’ and ‘literati’) libation.  Bible verses on weapons might just remind our boys that they are fighting a just war and they should do so justly.

Maybe they can’t be sure if God is on their side, but they can be sure that they are on God’s side.