We Are Ruled by the Unelected Elite

We Are Ruled by the Unelected Elite 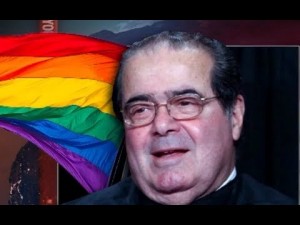 Thomas D. Williams reports here on Justice Scalia’s sharp observations about the recent Supreme Court decision. Scalia wonders how “nine lawyers” can presume to make such historic decisions not only for the United States, but for humanity.

Scalia noted that “the Federal Judiciary is hardly a cross-section of America.”

“Take, for example, this Court,” he said, “which consists of only nine men and women, all of them successful lawyers who studied at Harvard or Yale Law School. Four of the nine are natives of New York City. Eight of them grew up in east-and west-coast States. Only one hails from the vast expanse in-between.”

Scalia then observed that not “a single evangelical Christian (a group that comprises about one quarter of Americans), or even a Protestant of any denomination” is to be found on the Court, which currently consists of six Catholics and three Jews.

Instead of major decisions being decided at the local or state level by elected officials or by a referendum of the people, judges have taken the law into their own hands and over ruled the will of the people. The Supreme Court, rather than listening to the people and serving the people are now ruling the people.

“Today’s decree says that my Ruler, and the Ruler of 320 million Americans coast-to-coast, is a majority of the nine lawyers on the Supreme Court,” Scalia said.

One can’t help drawing other conclusions: if the Supreme Court has such power, who has the power over the Supreme Court? The President appoints them and Congress approves or rejects. Once they are seated they can serve as long as they like, and can only be removed by impeachment.

Objection to Obergefell vs. Hodges is one thing, but many are commenting on the bigger constitutional issues and the abuse of power.

In his nine-page dissent, Scalia ripped into the majority opinion, calling it a “judicial Putsch” that poses a “threat to American democracy.” He added that a “system of government that makes the People subordinate to a committee of nine unelected lawyers does not deserve to be called a democracy.”