What is the Real Division In Anglicanism?

What is the Real Division In Anglicanism? 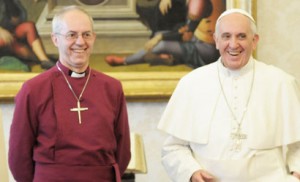 The Anglican Church is once again in turmoil, this time over the suspension of the Episcopal Church from the Anglican Communion for a period of three years.

Observers of the Anglican scene will feel that the Church of England and her worldwide confederation are engaged in one constant battle after another. Those who are familiar with Anglican history will agree that the battles have been pretty much relentless from the foundation of the Anglican Church in the sixteenth century.

“Why all the fuss?” you might ask, and “Aren’t Catholics also at each others throats the whole time?”

Firstly, the fuss is not rooted in whatever current issue is being debated. The fuss is rooted in the nature of Anglicanism itself. From the beginning the Anglicans have been unsure whether they were a Catholic Church or a Protestant Church. This identity crisis was not simply a matter of “Shall we have incense and lace at Mass or not?” it was not really a matter of “Are we a solid, Bible believing church or not?” Instead the identity crisis is more profound and cuts right to the root of what the church is.

If a Church is Protestant, however, it is founded a some point in history by a human being for what they perceive to be good reasons. If a Church is Protestant there is no idea that Mary is the Mother of the Church, and the apostolic foundation is simply one of adherence to apostolic teaching (to be found in the Bible) and perhaps a paper pedigree that claims some sort of apostolic succession. If a Church is Protestant it is founded out of the turmoil and troubles of a particular time in history and it therefore adapts and changes according to the particular turmoil and troubles of whatever culture and circumstances in which it finds itself. To be brief, a Protestant church is a man made institution and does not apologize for the fact.

Beneath these realities is therefore a very fundamental difference in one’s understanding of not only the church but the Christian faith itself. The Catholic Church regards the Christian religion as revealed by God through the ultimate revelation of himself through the incarnation of his Son Jesus Christ, who took flesh of the Blessed Virgin for the salvation of the world. The Sacred Scriptures are the witness to that revelation of God in Christ and the Church is the divinely founded and inspired Body of Christ alive and active in the world–revealed and established by God to administer the sacraments of salvation to mankind.

The liberal Protestant understanding is that the Christian faith is a construct that took place at a particular point in time due to the circumstances and culture of the day. The life, ministry and teaching of Christ are the important things. The Bible is the revealed truth from God and the Church is the group of believers who follow Christ’s teaching and help to spread that good news in the place and time in which they live. Conservative Protestants would have a higher view of the Christian faith being revealed, but their primary revelation is the Bible, and that revelation is what cannot change.

This, then, is the basic division within Anglicanism: Continue Reading