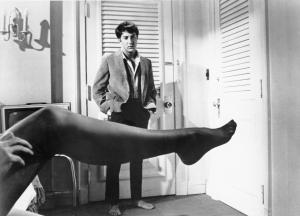 Dustin Hoffman in The Graduate

Forgive me if I have to invent a new word, but “weinsteining” is a good one. It has a juicy tang to it. Somehow the word itself sums up the trashy behavior of this movie mogul.

Over at Aleteia Tom Hoopes comments on the Hollywood cesspool, observing that Weinsteining is just the tip of the iceberg. Rampant gay parties, pedophilia, abuse of teens in the industry, sexualization of children is all part of the slop and smut, and its not just women who are harassed. Remember the film The Graduate in which the seduction of a young man by an older woman was portrayed as a normal rite of passage?

He also makes the point that it doesn’t really pay to put smut in movies. The highest grossing films of all time are not gross. We’re talking about Star Wars, Sound of Music, ET and Snow White.

The reality is that Weinsteining is hooked up with the whole Hugh Hefner-playboy sex game culture.

I have written here about a new kind of Puritanism that is coming out of the Weinstein scandal. But simply blowing the whistle on sexual predators is not really enough. What takes the place of sexual predation, rampant promiscuity and sexual harassment? The libertarians would still like to have their crumpet and eat it too.  In other words, they want the total sexual freedom without the Weinsteining.

But is that possible? Do they not understand that the very people who most promote total sexual freedom are the Harvey Weinsteins of this world? They are the guys who are prowling around looking for flesh and who consider sex to be playtime for the playboys.

What both men and women really want is love–not just sexual escapades, and love is a difficult, fragile and delicate art. It requires patience, skill and expertise to build this thing called love. In fact it is the work of a lifetime. That’s why the wise men and women of the ages and the wise men and women of the Christian faith have always said that true love an only be built within a lifetime commitment of one man and one woman, and that even then it is a perilous journey full of risk and adventure.

The result is one of those delightful sixtieth wedding anniversaries in which the two old folks have clearly learned through good times and bad what love is really all about. That is a great joy and delight for all–full of love. Full of life. Full of true happiness.

Weinsteining kicks that in the face, spits on it and tramples it underfoot.

The sooner we realize that this is the true horror of Weinsteining–and not just the nasty sexual predation and harassment–the sooner we can start to build a raft out of the shipwreck of modern marriage.