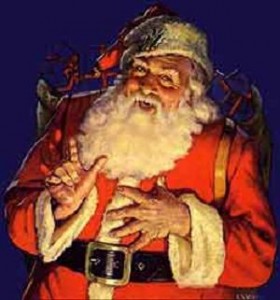 From the Christmas archives comes this article at the Imaginative Conservative in which I ask what’s good, bad and indifferent about Santa Claus.

Some time ago a pastor friend of mine incurred the wrath of a squadron of militant mama bears when he preached at a school service against Santa—calling him a “fat pagan elf.” The good priest meant to extol the virtues of Saint Nicholas, but his iconoclasm of a contemporary Christmas icon was not appreciated and the complaints flooded his inbox.

The most extreme form of anti-Santa preaching is the frightening realization that “Santa” is an anagram of Satan. This sort of conspiracy theory linguistic legerdemain is always amusing because its proponents take it seriously—like the loons who argued Elvis must be alive because his name is an anagram of “lives.” The anti-Santa Scrooges have their own tradition. The Puritans of Cromwell’s England famously banned Christmas as being pagan and Catholic. Their denial of Christmas crossed the Atlantic, and tendrils of the same spiky negativity curl into our modern age like some poisonous form of holly and ivy—causing preachers and teachers to call “Bah Humbug!” on jolly old St. Nick and warn that Santa is indeed Satan disguised.

I’m for setting them on one side, and celebrating Santa—remembering that a man is always right in what he affirms and wrong in what he denies. Santa Claus is a very interesting amalgamation of various European and Christian traditions.