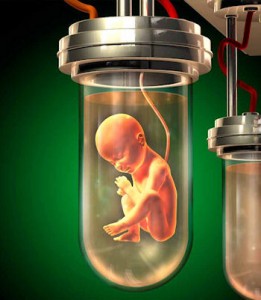 In the combox over at CRUX a discussion was going on about in virtro fertilization, and some readers questioned the church’s opposition to it.

A simply stated explanation  of the church’s opposition to IVF technologies is found here on the USCCB website, and the official teaching from the Vatican–a document called Donum Vitae (The Gift of Life) can be found here.

The Church promulgates these teachings for the sake of the child — insisting that a human being is more than the product of a laboratory procedure, and instead has the right to be conceived in the marital embrace of his parents and carried in the womb of his natural mother.

This raises the interesting question of the importance of “the marital embrace” at the point of conception and the right of a child to be carried in the womb of his natural mother.

Why are such things important? Let’s consider the right of the child to be carried in the womb of his natural mother first. We now realize that the nine months of gestation are formative for the child. We know this physically because we encourage the pregnant woman to avoid too much drink, drugs and smoking. Why? Because it is harmful to the unborn child. We encourage the pregnant woman to be happy, relaxed and confident. Why? Because it helps the unborn child. Furthermore, an increasing amount of anecdotal evidence confirms what common sense tells us: that the emotional, mental and spiritual life of the mother during pregnancy affects the child.

I remember hearing a mother in England telling the story of how she dealt with her crying infant. During pregnancy the woman would sit down after a busy day, kick up her feet, have a cup of tea and some cake and watch her favorite soap opera. She observed after the child was born that as soon as the theme music from the soap opera started baby would calm down and go to sleep happily. Mother concluded that the baby keyed that theme music with Mom being happy and content. In other words, Mom transmitted her emotions and mood as well as nourishment to the unborn child.

Again, common sense and universal experience tells us that when baby is carried in the womb of his mother who loves and cherishes him and can’t wait for baby to be born, that this is good for the child. Furthermore, when the baby nurses at the breast and gazes at the loving mother we all know that this bonding of love and nurture and nourishment is good for the child. He is getting not just mother’s milk, but mother’s attention, mother’s love, mother’s acceptance. At the foundation of the child’s existence he is receiving the fullness of a mother’s love.

But with surrogate motherhood we interrupt this process deliberately. We plan for the mother to be separated from the child. We expect–even pay her–NOT to bond with the child. At birth the child is removed from her. In most cases the child will never know the bonding with his mother that comes with breastfeeding and early nurturing. What’s wrong with artificial insemination and surrogate motherhood? That the child is deprived of a mother’s love at the most basic level of his existence.

Let’s take it a step further and consider the church’s teaching that conception is best realized within the “marital embrace.” I believe not only are the months of gestation a time for emotional, mental and spiritual influence of the parents to the child, but that the moment of conception is important.

Here’s why. I once counseled a fifteen year old kid I’ll call Jimmy who suddenly went haywire. He had been a nice, sweet, smart boy–very obedient and loving. Then at fifteen he went Gothic. Dressed in black, became super rebellious and inexplicably began to steal cars. We asked Jimmy why he stole cars. He didn’t know. We said he would go to jail if he kept stealing cars. He knew that. He kept stealing cars as if there was some dark rebellious compulsion to his behavior. So we began to probe a bit further into his background.

Jimmy didn’t know this, but his mother told me that he was adopted and that he was conceived in the back seat of a car as an act of rebellion when his mother was fifteen years old.

It was as if fifteen year old rebellion and cars was written into Jimmy’s personality in a weird and disturbing way. Of course there was nothing genetic about it. There was nothing that could be proven scientifically.

However, we can extrapolate a theory from this experience. Continue Reading