Where Did the Wise Men Come From? 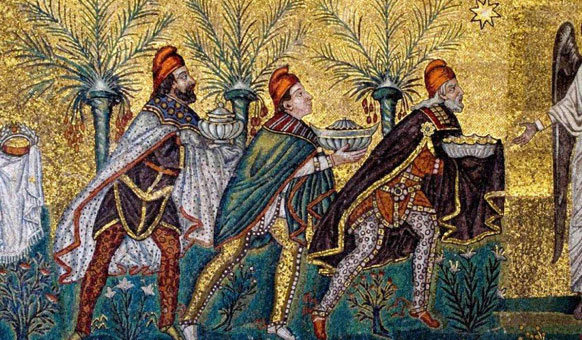 Where did the Magi come from? The usual answer is from Persia. They are identified with a caste of Zoroastrian astrologers and philosophers known to be active in Persia from the sixth century BC. The term “magi” is derived from the Greek magos which in  turn was derived from the Persian term for the philosopher-astrologer-priests. They were active during the empire of the Medes. But did the wise men really come from Persia? I’m increasingly interested in the idea that they came from the Arabian peninsula, from the Kingdom of Sheba.

Just because Matthew uses the term “magi” does not mean that he is necessarily referring to the Persian caste of astrologers. Although the term for this sort of wise man was derived from the ancient Persian sect, it was a term which was used of any sort of sorcerer, astrologer or occult practitioner. Thus in the Acts of the Apostles we meet Simon Magus who is a sorcerer. Also, the sixth century BC was the time they flourished? By the time of the Roman Empire the Medes were long gone.

The religion of Persia (modern day Iran) during the time of the Roman Empire was a mish mash of belief systems. The Parthian Empire was there at the time, and they had been horsemen from the East who swept in and took over. They adopted Zorastrianism, but also practiced ancient tribal religions, worshipped the Greek and Roman gods and operated in a kind of religious free market like most of the ancient world at that time. Whether there was an active Zorastrian caste of astrologer-priests at the time of Christ’s birth is debatable. That they had an interest in whether a new born king of the Jews would appear is also debatable.

It is my opinion that the word “magi” has been a false clue. Matthew is probably using it as a more general term to refer to any kind of astrologer-wise man or magician. I believe the more interesting clues to their origin is not the term magi but the gifts they brought. This, combined with the prophecies from the Old Testament and other clues would point to the magi coming not from Persia, but from the ancient kingdom of Sheba–which is in modern day Yemen at the southern tip of the Arabian peninsula.

Why Yemen? Archeologists are increasingly agreed that the ancient and powerful kingdom of Sheba was located at the Southern tip of the Arabian peninsula, and that it’s reach extended deep into Eastern Africa. The three gifts of the magi indicate an origin in Sheba since the kingdom was known firstly for its vast wealth from the gold mines of Africa, secondly, the Boswellia tree–from which the gum that is used to make frankincense is tapped–is native only to the Arabian peninsula and Somalia. Thirdly, the commiphora tree–from which the resin to make myrrh is derived–also grows only in the Arabian peninsula.

The Kingdom of Sheba therefore grew rich on these three unusual, rare and precious commodities: gold, frankincense and myrrh. Of course in the ancient Middle East wise men from Persia could have brought these gifts, but if they were seen not only as rich gifts, but a sort of diplomatic gift–kings bringing the best produce and commodities from their own country in h0mage to a neighboring king, then identifying the country of origin with the gifts makes sense.

There is more: we remember that the Queen of Sheba brought rich gifts of gold and spices when she came to pay homage to Solomon. (I Kings 10:2) and Jesus refers to her in Matthew 12:42 saying that she brought gifts to Solomon, but “one greater than Solomon is here” implying that kings from the same country had come to pay homage to him as their ancestor had to Solomon? Finally, the prophecy from Isaiah says that caravans from Midian and Ephah and Sheba would coming bearing great gifts of gold and frankincense. To get to Palestine from Sheba (Yemen) the route passed through the ancient Arabian kingdoms of Midianites and Ephah.

Then there is the Incense Road. This was an ancient trade route whereby spices from India, incense from Arabia and exotic riches from Africa made their way up the Eastern coast of the Arabian peninsula into Palestine and then on to the port of Gaza for further travel to Italy and points around the Mediterranean. Thus the wise men would have followed long established trade routes. They would already have had long standing knowledge of the history of the Jews. References to Midian, Ephah and Sheba abound in the Old Testament and the Arabian peninsula was much more the region of the Hebrews and their ancient neighbors than Persia. Furthermore, the kings from Sheba would have had long standing relationships with the Jewish people. That they would have felt comfortable going to Herod’s court to ask directions would make total sense.

Then what about the story that they followed the star until they found the Christ child? The text doesn’t actually say that. The wise men said they saw his star “when it arose” and they came to worship him. It makes more sense that astrologers in the Kingdom of Sheba-Yemen understood the congruence of the planets and stars that indicated a new King of the Jews would be born, and they left on their established trade routes to pay him homage. The only time the star moves is when they leave Herod’s palace. It says the star they had seen when it arose re-appeared. They were filled with joy when they saw it–which implies that they hadn’t seen it since it had arisen. The star then guided them to the place where the child was. How the “star” moved and what that astrological sign was specifically is the subject of much speculation.

Finally, the idea that the magi were Persian Zorastrian philosopher-astrologers seems to be based only on the derivation of the word magi. Brent Landau suggests another theory here. He unlocks an eight century Syrian manuscript called the Revelation of the Magi–which is supposedly written by the Magi who came from China or India. If that is the case they could have made the journey as the Incense Route was also used by traders from India and China. However, an eighth century manuscript is unlikely to have much historical value as to the actual identities of the wise men.

So far, so speculative. The fact is, we don’t know where the wise men came from, and although early sources suggest they came from as far away as India, China and Arabia, most say Persia, and I’m happy to be informed and corrected by people who know far more about it than I ever will.