Who Am I to Judge?

Who Am I to Judge? 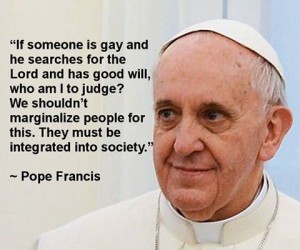 “Who Am I to Judge?” will probably go down in history as Pope Francis’ most quotable quote.

The context of his quip is well known. On the plane back from World Youth Day in Brazil he was asked about the so called “gay lobby” in the church. He replied, “When I meet a gay person, I have to distinguish between their being gay and being part of a lobby. If they accept the Lord and have goodwill, who am I to judge them? They shouldn’t be marginalized. The tendency [to homosexuality] is not the problem … they’re our brothers.”

Putting the gay question on one side, I am increasingly interested in the question of judgement.

Catholics insist that we can make judgements. We make an objective judgement about an action but we do not make a judgement on the person or on the eternal destiny of their soul.

This is the distinction that many secularists and Protestants fail to make. They think that if you judge an action to be wrong, that you must therefore judge the person, condemn the person, isolate and finally eliminate the person.

Catholics should be able, however to step back from judging the person and separate out the action from the individual. It is not only possible to do this, but vital to do it, and here’s why: