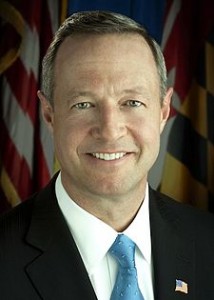 Martin O’Malley is the latest Catholic politician to come out as a duplicitous “Catholic.”

Deacon Kandra posts an excerpt here from an interview in which O’Malley displays some amazingly twisted thinking to support homosexual marriage–even though he’s a Catholic.

As far as I can make out his belief goes like this: “the child of a homosexual couple deserves to grow up in a “proper home” so his gay parents should be allowed to marry.”

This argument is on a par with that argument for abortion: “Every child a wanted child.” So instead of wanting children we kill all the children we don’t want and this somehow shows that we love children…

Am I the only one to find this kind of talk creepy? We’re heard of Cafeteria Catholics…this sounds like Creepy Catholicism.

Martin O’Malley,  Joe Biden and Nancy Pelosi and all the other politicians who claim to be Catholic but make up their own religion which they call Catholic are not just deceitful–they give me the creeps.

They have the nerve to publicly proclaim themselves to be good Catholics, while not only disobeying church teaching, but dishing up their own version of Catholicism–a version which suits their own political purposes because guess what–like the Kennedys and Kerrys before them–they still want to gather up as much of the old Democratic Catholic vote they can muster.

However, their party policies are increasingly inimical to even the most basic form of Catholicism, so instead of changing their political views they have the gall to make up their own version of Catholicism.

The problem is, if they lie and squirm like this and twist the truth of their own religion, what else will they not lie about? If they twist the truth to suit themselves like this, then they will twist the truth about anything at all. If you can’t be honest and clear about your religion, then you are very creepy indeed and completely untrustworthy.

If the government tomorrow said that all Catholic priests were to be rounded up and shot these people would probably say something like: “As a Catholic I believe in the rule of law and the need for national security. If a person exhibits hate speech or hate beliefs they are a threat to national security and I believe, as a faithful Catholic, in security and justice for the common good…if these men obeyed the law they would have nothing to worry about.”

If Creepy Catholics disagree with the church they should  have the courage of their convictions and take one of three different paths:

Do one of these, but don’t squirm and lie and twist the truth pretending that you are a good Catholic when all you’re good at is being just another creepy politician.