Why Are the Crowds Frantic for Francis?

Why Are the Crowds Frantic for Francis? 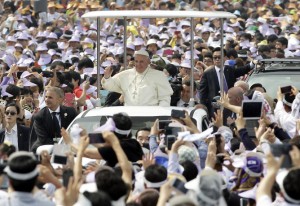 The Pope’s visit has been an astounding success with tens of thousands crowding to get a glimpse of him, the President and his family going out to greet him and the Majority Leader reduced to tears and chucking in his job as a result.

What’s happening? Are we about to witness a religious revival in America? Rod Dreher doesn’t think so. In a long article here he takes the religious temperature of Americans pretty fairly. Rod takes his usual pessimistic “We few we faithful few, let’s hunker down behind the bunkers” viewpoint–an opinion with which I have a good bit of sympathy.

Rod doesn’t see a wave of conversions to true blue Catholicism. For him the Francis effect is a blip.

Ross Douthat thinks the hysteria over Pope Francis is a sign that perhaps America isn’t quite so secular after all. He reckons that there is a deep religiosity not only in the American people, but in human beings generally. He quite rightly points out that Benedict XVI’s apostolic visits were equally popular among the people even if he was derided among the cognoscenti.

More cynical observers will claim that hoi polloi simply like a good parade. They like spectacle and sparkle, popes and pizzazz. Except that there’s  not much of a parade–just an old guy in a jeep, and so far there has been very little hoopla and razzle dazzle.

Well, maybe they are addicted to celebrity. Maybe the people just want to see somebody famous.

No doubt there is an element of truth to some of this, but there’s something else going on. Why such a media rush? Why did all the politicians and ambassadors turn up? Why the adulation and rock star welcome?

I know! Maybe it’s because what Catholics believe about the Pope is true! Continue Reading