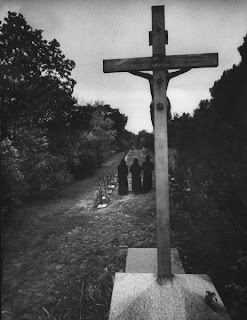 The words ‘monk’ comes from ‘monos’ or ‘alone’. In other words, ‘alone with God’. Nobody but me and God. Everything else and everyone else given up for God. Alone with God. God alone.

This example was first set by the desert fathers in the early fourth century. Christianity had become fashionable. The emperor and his mother embraced the faith. People were converting in order to be part of the inside circle. So St Anthony took off to the desert to live in a cave.

The desert fathers of Egypt therefore set an example of renunciation. They deliberately walked away from the power, the privilege, the prestige, the prosperity and the pride that could have been theirs. Instead they lived in caves, did quiet, repetitive work, kept silence and learned to pray.

Now the thing I have always loved about the monastic founders–whether it was St Anthony of Egypt or Pachomius or Benedict–is that they didn’t set out to start a ‘movement’. They just did what they had to do. They were faithful to their vocation and calling. That others joined them, and that a movement developed was not only an unexpected growth, but often an unwelcome one at that.

Furthermore, they changed history, and that is also something they didn’t set out to do. Anthony and Pachomius and Benedict went out to mind their own business, work hard, pray hard and study and be true to themselves and their God. They ended up preserving classical learning, laid the foundation for a new christendom, and established a refuge for what was left for civilization, thus planting a seed for a new civilization.

You thought monks were just cutting themselves off–doing something radical and a little bit misanthropic. In the meantime they were doing something beautiful for God. Hidden away in the desert, they are cultivating the power of prayer and planting the seed of God in the world.