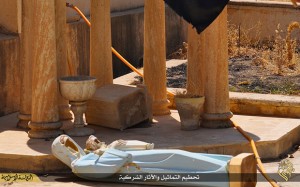 London’s Daily Telegraph reports here on the latest waves of vandalism against Christian shrines in Iraq.

Islamic State of Iraq and the Levant (Isil) militants have released new images showing the destruction of Christian churches in the terror sect’s strongholds in northern Iraq.

The photos depict groups of fanatics removing a cross and bell from the top of a church and triumphantly placing the black Isil flag on top instead.

In other shots, men with hammers chisel away at Christian emblems of Saint George and the Virgin Mary.

The enemies of Christ and his church are surrounding the Christians of Syria and Iraq.

St George is a vital symbol in the struggle and it’s not surprising that he is the focus of their hatred. George was a young Christian who became a Roman soldier and refusing to offer sacrifices to the gods, was martyred. George was from Palestine, but was martyred in the area of Turkey and is venerated by both Christians and Muslims in Turkey and Syria.

But who should the wolves of ISIS hate? Christ, his mother and his holy martyrs.

St George is also important in this battle because he is one of the primary military saints. Those who enter the spiritual battle for Christ and his church claim St George as one of their worthy patrons.

Taylor Marshall has written a fascinating modern version of St George and the Dragon–pulling in saints Christopher and Nicholas and weaving a wonderful tale. I’m halfway through the book at this time and will write a full review shortly. Check it out. It’s called Sword and Serpent