Women Priests and Married Priests: Are These Two Joined Together?

Women Priests and Married Priests: Are These Two Joined Together? 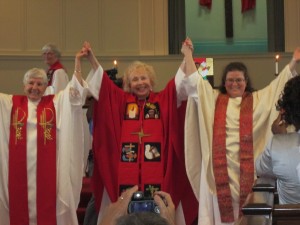 The other day some rumors started flying that one of the newly appointed bishops of LA–Fr David O’Connell, was on the record as being in favor of married priests and women priests.

The comment was from a statement somebody, somewhere dug up about Fr O’Connell from 2002.

I’m sure if it is true that he shouldn’t necessarily be held accountable for a comment made over ten years ago in one interview. Nothing that I have seen suggests that Bishop Elect O’Connell is a campaigner for women priests or that he has publicly upheld this teaching repeatedly and formally.

If he expressed a personal opinion about the matter we have to distinguish that from campaigning for something which goes against church teaching or formally and publicly going against the teaching of the church.

This is a storm in a teacup, and one which is easily clarified if Bishop elect O’Connell thinks it worth the clarification.

However, if the statement about bishop elect O’Connell is correct, and he expressed his opinion that the church should have women priests and married priests, it exacerbates a problem which is all too prevalent in progressive Catholic circles.

Last year I was asked to write a book about married priests. But when I was researching the subject I found  there were only two opinions out there in print. One was the progressive Catholic opinion that the church should get with the times and have married priests. Almost immediately the writer would add that the church should also have women priests. Immediately after that, in many of the writings the author went on to advocate “a new approach” to people with same sex attraction and some of them went on to endorse same sex marriage.

On the other side of the net were the traditionalists who argued strongly against having married priests, and of course they never mentioned the other two issues.

What is troubling is that the progressives who were calling for married priests invariably also called for women priests. They seemed to be completely ignorant that these are two completely separate issues.

If bishop elect O’Connell is of the same opinion, then it seems very odd that he should be elevated to a bishopric, for it would seem that he does not understand the distinction in the church between a discipline and a doctrine.  Could one of our teachers of the faith be so lacking in understanding about the faith itself as to make this mistake?

I trust not. I suspect the story about Bishop O’Connell is no more than a scrap of a rumor based on an off hand comment given in an interview about a different subject ten years ago.

Nevertheless, it raises a serious issues among progressive Catholics.

The church can change discipline. She does not have the authority to change doctrine.

How do we know that the issue of women priests is doctrine?  Continue Reading