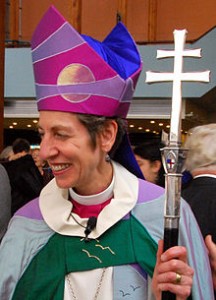 Church of England women priests have joined Episcopal Presiding Bishop Katherine Jefferts Schori at a conference with a witch and a man married to a Muslim man.

A leading witch and herbalist shared a Church of England platform last night with other women religious leaders including the Presiding Bishop of the US Episcopal Church and Gogglebox tv vicar Rev Kate Bottley.

Helene Mobius, who heads the prison chaplain ministry of the Pagan Federation, challenged stereotypes of women at the event, the latest in the Westminster Faith Debates series at London’s liberal flagship church, St James’s Piccadilly.

One of the Church of England’s leading women priests, Rev. Lucy Winkett was there.

Rev Lucy Winkett, Rector of St James’s, said she hoped that women bishops would open up space for issues such as domestic violence to be addressed more effectively. It mattered not so much that women were bishops and priests, as “how” they were bishops and priests. The authority held by a woman will be held “differently” from that held by a man. “It won’t necessarily be held more nicely,” she warned.

Women’s leadership not being “nice”? She’s right about that.

The Episcopal church under the Katherine Jefferts Schori has been far more oppressive and harsh than any tenure of a male Presiding Bishop. Jefferts Schori has instituted a record number of lawsuits against fellow Episcopalians, deposed priests and bishops who would not kow tow to her, kicked congregations out of their properties and presided over the most disastrous financial and numerical decline in the Episcopal church’s history.

Paganism had a “deep reverence” for both the feminine and masculine, not in a partnered but in a “conjoined” sense, she said.

This was not to diminish the role of God because without His “fertile seed” the cycle of life could not continue, she added. She criticised the debasement of women in society which had seen words such as “crone”, which once meant “elder”, used as a term to mean something quite different.

“The word crone does not mean wizened old cackling pagan,” she explained. Instead it referred to a woman who had passed beyond menstruation. It was the “passage of the mother becoming grandmother, no longer able, thankfully, to reproduce.”

This led to some discussion about whether there should be an authorised liturgy in the Church to mark the menopause.

The event was not exclusive. There was one man present on the panel:

Adam Dinham, the only man on the panel, and who is married to a Muslim man, and who was there as director of the Faiths and Civil Society Unit at Goldsmiths, which sponsored the event, said he had wanted the evening to celebrate and think about the contribution of women as faith leaders in the Anglican community as well as other religions and traditions.