You Shall Handle Serpents…

You Shall Handle Serpents… 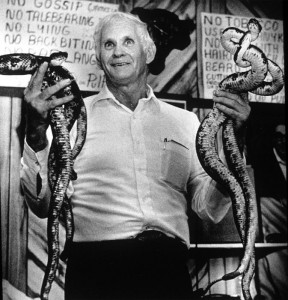 On Facebook the other day somebody screamed because she had had an encounter with a five foot black snake. I guess she would not be inclined to go in for one of the forms of Protestantism here in the American South.

Having lived in South Carolina now for ten years I feel like I am starting to appreciate what it means to be a Southern Gentleman. I steadfastly refuse grits out of loyalty to my Yankee roots, but I’m fine with BBQ, Iced Tea, Bourbon, seersucker and straw hats.

I’m also continually fascinated with how churchified the American South is. Come Sunday morning the church parking lots are full, and people still ask you what church you go to when you meet. Radio ads say, “We’re open on Sunday… but only after church.” Really.

I like driving through the countryside and spotting the little hot Prot churches. I want a notebook where I collect them: Church of God Prophecy. Four Square Church of the Holy Ghost. Beulah Tabernacle. Praise Cathedral. (which is posted outside a converted garage) Trust God Ministries or God’s Fellowship.

One of the extreme elements of Southern Christianity are the snake handlers. At first I thought this referred to our presidential candidate’s security teams, but I’m not going there…

Back to the subject: I’ve always been interested in  the lunatic fringe of religion wherever it occurs. Here’s some information on the real famous snake handlers of America’s Appalachian region:

What’s interesting is that it is not something which is dying out. The article here was written in 2003. Indeed, the practice is spreading. I also found a couple of things very interesting in the article. First is that the snake handler interviewed said he came to the practice after praying about it and reading the Scriptures.
He decided to handle the snakes “after a religious awakening that included baptism and scripture study. ‘I prayed for this, for God to give me the sign to do this because it was in the scriptures,’ he said. ‘I don’t want to get out of it. I want to get further into it.’ ” There is no sign that this fellow is insane or imbalanced. Operating on the same authority system of non Catholic Christians everywhere, he sincerely read the Scriptures, prayed about it, and honestly felt he was led by the Spirit and was given a sign to handle snakes.
The other thing which I found interesting in the article is that the snake handling services are really not that extreme or weird. An expert on the phenomenon says, “They look just like any other Pentecostal, Charismatic type service. ‘If you were there when they were not taking up serpents, or even during other parts of a service where they did, it would be like many other Pentecostal groups,’ he explained. ‘There is singing, preaching, laying on of hands, praying, testifying, and that sort of thing. It’s kind of an expressive church service where people freely share emotions, a very participatory service like most Pentecostal services.’ “
What is interesting to me is that the snake handlers are not, for the most part, heretical in their beliefs. They are pretty much  theologically identical to other churches in the Protestant, Pentecostalist, Charismatic tradition. In other words, they’re not blatant heretics. They’re  orthodox Protestant Christians. They’re just the same as other fundamentalist, charismatic Protestants except they handle snakes.
People who have attended their churches will say the same. They testify that it’s pretty much the same mixture of heart stirring music, pulpit thumping Bible waving preaching, then some speaking in tongues and so forth, then they get out the boxes with rattlesnakes in them.
Sort of like taking the collection in reverse. In some churches they take your money. Here they give you a snake.
Meanwhile this article from Wikkipedia outlines a bit more of the practice, and shows how it is spreading. It lists charismatic holiness churches where snake handling goes on. They have spread to Indiana, Alabama, Canada and throughout the American South. Hey, we even have one here in Greenville, South Carolina!
Image via Bing
PatheosDwight2016-07-23T06:15:57-04:00July 23rd, 2016|Categories: Patheos|Comments Off on You Shall Handle Serpents…