Anglo Catholics to be Received?

Anglo Catholics to be Received? 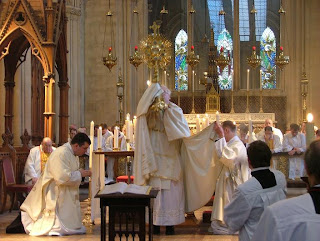 Damian Thompson blogs at some length about the rumor that Forward in Faith (yes, that’s yet another sub group of an Anglican sub sub group) are ‘in discussions’ with Rome about corporate reunion. Is it just me, or is this getting a teeny bit tiresome?
Damian has too many precious Anglo Catholic chums. He talks sympathetically about an Anglo Catholic friend who could not become a ‘Roman’ because of the awful liturgies and architecture in the modern Catholic Church. I’m afraid this is just the sort of Anglo Catholic we don’t want. If he can’t see the big issue of authority in the church, and simply come across with no conditions and without worrying himself about ‘the right kind of liturgy’ then he hasn’t got a clue yet what it means to be Catholic.
Anglo Catholics should grit their teeth and get over it. I love beautiful liturgy, solemn worship and reverence at the Mass as much as anyone, and readers of this blog will know that I’m the first one to lament trendy guitar masses, goofy relevant homilies, politically correct liturgies etc.etc.etc. but the matter of converting to the Catholic faith is simpler and more fundamental and more important than the liturgy. They should remember Newman’s observation that Augustine or Irenaeus, should they visit modern Britain, would visit the ancient churches, and soon find themselves in the tin hut in the bad part of town with the Irish immigrants because there they would find not the prettiest church with the nicest liturgy and the finest music, but there they would find the true church.
There is a matter of priorities. Being received into the Church humbly with no conditions is necessary. Fussing over ‘proper liturgy’ is like humming and hawing over which china teacup to rescue when your house is burning down.
Already Rome has given the dis-enchanted Anglicans just about everything they want: They have the offer of their married priests being re-ordained. They have the offer (in the US anyway) of their own Anglican based liturgy. They have the offer (in the US) of their own quasi- independent parishes, and yet the number who have taken up the offer of Anglican Use can be counted on two hands, and the number of former Anglican priests who have come in under the pastoral provision is surprisingly small. Instead, they either quietly compromise with the Anglican-ECUSA heresy or they tootle off and start yet another Anglican schism, then they write me indignant emails saying ‘We are not a garage church you know…our Archbishop has a degree from Princeton…” Big whoop.
As my recent post said, “Be suspicious of anyone who makes a simple matter complicated.” The matter is quite simple: If you really understand the claims of the Catholic Church and if you really are called to be a Catholic, then there’s the Tiber. Swim it.
Furthermore, the Catechism says not to is a serious sin.
PatheosDwight2009-08-06T15:50:00-04:00August 6th, 2009|Categories: Patheos|0 Comments