Abbot Leo and Me

Abbot Leo and Me 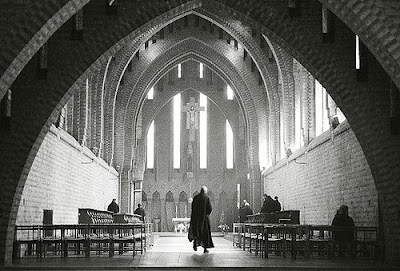 Interior, Quarr Abbey Church
It was the early 1990’s and I was a country vicar on the Isle of Wight in England. One of my favorite haunts was the Benedictine Abbey at Quarr. I made my annual retreat there, used to visit with Fr Joe Warrilow, and Abbot Leo Avery was my spiritual director. By this time in my spiritual journey I had embraced (I thought) the essentials of the Catholic faith. My understanding of priesthood and the sacramental life in the Anglican Church was ‘Catholic’. I was much influenced by Catholic spirituality and although I wasn’t a card-carrying Anglo Catholic, I considered myself to be ‘a Catholic within the Church of England.’ I simply wanted to follow what C.S.Lewis called ‘Mere Christianity’. In other words, I wanted to be part of the ancient faith in England, and it seemed right that the way to do this was to be ‘a Catholic in the Church of England.’
I mentioned this in passing to Abbot Leo and he gently stopped me, “You know, I think it’s marvelous that you want to be Catholic, but we Catholics define what being a Catholic is rather differently than you do.”
“Yes?” I replied.
“Well, we think that at the heart of being Catholic is obedience to the teaching of the Holy Father.”
“But I am obedient to the teachings of the Holy Father!” I protested. “In fact, it seems that I am more of a faithful Catholic than most Catholics I know! I follow the Pope’s teaching in my marriage, I follow the teachings of the Catholic church in my celebration of the liturgy, in my prayer life and in my doctrinal and moral beliefs. I am obedient to the teachings of the Pope.”
Abbot Leo smiled, “Yes, but what about the teaching of the Pope that to really obey the teachings of the Pope you have to be in full communion with him?”
Well, if Peter was the Rock, then I was between a Rock and a hard place.
PatheosDwight2009-08-07T08:24:00-04:00August 7th, 2009|Categories: Patheos|0 Comments