Are You Scared of Friday 13?

Are You Scared of Friday 13? 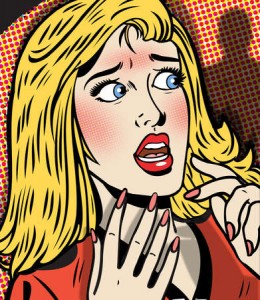 Driving to the office this morning I witnessed a bad car wreck.

Driver came off the road into a power pole, brining it down, ruining the car and ending up in the ditch.

Then I put the thought away. Stupid to be superstitious. Next thing I’ll be carrying a rabbit’s foot in my pocket and watching out for black cats crossing my path.

If you’re afraid of the number thirteen you suffer from the wonderfully named triskadekaphobia, and if you are specially troubled by Friday the thirteenth you can claim paraskevidekatriaphobia on the list of your phobias.

There’s no record of paraskevidekatriaphobia before the nineteenth century.

Scholars reckon that this is a coincidence of superstitions. The first is that Friday is associated with the Lord’s crucifixion and there were thirteen people at the Last Supper–the thirteenth being Judas.

According to the Stress Management Center and Phobia Institute in Asheville, North Carolina, an estimated 17 to 21 million people in the United States are affected by a fear of this day, making it the most feared day and date in history. Some people are so paralyzed by fear that they avoid their normal routines in doing business, taking flights or even getting out of bed. “It’s been estimated that [US]$800 or $900 million is lost in business on this day”.[5] Despite this, representatives for both Delta Air Lines and Continental Airlines have stated that their airlines do not suffer from any noticeable drop in travel on those Fridays.[16] (wikkipedia)

What should a Catholic do about such superstitions? Take it with a pinch of salt…

Which reminds me that the only exorcism I ever witnessed occurred on Saturday the fourteenth and it was the night before that the girl began to experience troubles with an evil spirit. (Cue spooky music)

Maybe the devils use these events as an opening and monopolize on our irrational fears.

Forget the speculation. He who is with us is greater than all these fears.

Remember the words of the Lord, “Do not be afraid!” Fear is at the heart of superstitions and the more we put our trust very simply and joyfully in the goodness of the Lord the more all of our fears can be overcome.