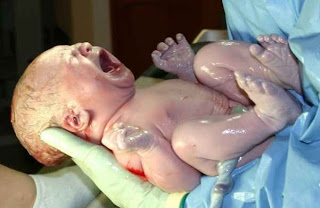 There seems to be a growing popularity among pro abortion folks that life begins ‘at the first breath.’ I’m not an expert on this view of the beginning of life, but I know that one strain of Hebrew thought proposes that this is when life begins. They take this poetic view from the Genesis story where God ‘breathes into man the breath of life.’ A colleague tells me that this understanding of the beginning of human life was also held by Rudolph Steiner. Steiner taught that a spirit or ‘soul’ hovers over a child about to be born and enters into it at the first breath.
What interests me is how people who would otherwise criticize Christianity (and Catholicism in particular) for being pre-rational, unscientific, medieval, etc. etc. subscribe to this patently unscientific view of human beginnings. Let’s face it, the idea that human life begins at the first breath might be a beautiful and poetic opinion. However, it is no more than that. It is pre-rational, unscientific, and merely poetic. Science teaches us that human life begins at conception. All the research points increasingly to not only the earlier develpment of the human body in the womb, but also the early development of personality within the womb. It is not difficult to read up on this stuff, and it is not hard to understand, why even a Harvard law professor could understand it if he wanted to. It needn’t be above anyone’s pay grade.
The Catholic Church, so often portrayed as obscurantist, anti scientific, backward and unthinking, is right up to speed with the science on this one.
It is the pro abortionists, trying to justify the murder of innocent children in the womb, who take refuge in half-baked, out moded, unscientific, romantic and esoteric notions.
PatheosDwight2009-03-24T08:14:00-04:00March 24th, 2009|Categories: Patheos|13 Comments