Bringing in the Sheaves

Bringing in the Sheaves 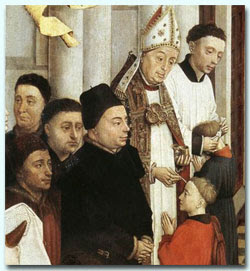 …or herding in the sheep, or rescuing the perishing, or exercising the ministry of reconciliation, or soul winning… whatever image you use, the Catholic Church in the United States estimates that about 154,000 adults were baptized or received into the Church at Easter this year.
Statistics are slippery things. What do these numbers mean in the overall statistics of population, church goers and believers in America? Dunno. Do Catholics have more converts than other Christians? It’s impossible to compare these numbers with other denominations because there are so many variables. What constitutes new membership in a Baptist Church for instance? Does a ‘new’ family count because they have shifted their membership from first Baptist to Second Baptist, or moved from the Hallelujah Four Square Pentecostal Church of God into the Jesus Saves Missionary Redeemer Church? Dunno.
Comparisons are odious, and we have to admit that the numbers received into the Catholic Church are outweighed by the number of lapsed Catholics. Be that as it may, we can still rejoice in the objective fact of 154,000 new Catholics. It means that RCIA (for all its faults) is working. It also means that the Catholic Church (which doesn’t appear to be an Evangelical, soul winning church) is not doing too badly. The other thing which is in the Catholics favor, is that these 154,000 souls are folks who have not just joined on a whim. They haven’t come into the Catholic Church as the result of an emotional appeal or a fire breathing sermon (as exciting as they are) They’ve come to baptism, confirmation and reception into full communion after at least a year’s course of study, discussion, prayer and formation.
Will they stay on board or abandon ship? Will they get seasick or fed up with their shipmates? Will they long for land and set out in their own lifeboat? God knows. All we know right now is that they have walked up the gangplank, and we welcome them aboard.
PatheosDwight2007-04-10T09:07:00-04:00April 10th, 2007|Categories: Patheos|0 Comments