Vatican 2 and the Shortage of Priests

Vatican 2 and the Shortage of Priests 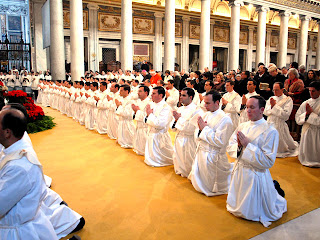 A blog dedicated to promoting vocations in the Catholic Church has this post which chronicles the devastating shrinkage in the Catholic priesthood and religious orders in the USA. The numbers represent a reduction of about 90% since the mid 1960s.
What’s up? There are so many different reasons for the seminaries and religious houses reducing as they have. The favorite scapegoat among conservatives is the Second Vatican Council. “The Council was a disaster!” they cry. “See what the result has been? You only have to check the statistics. Since the Second Vatican Council the Catholic Church went right down the drain.”
I’m not sure they’re right. It could be that if the Council hadn’t happened things would have been even worse. The fact of the matter is, Western civilization experienced a cataclysmic revolution in the second half of the twentieth century. Along with a quantum leap in technology came a huge leap forward in prosperity among Americans and Western Europeans. With the increased prosperity came a perceived lack of need for God. (if it’s difficult for a rich man to get into heaven its just as difficult for a wealthy society to know its need of God) Added to this was in increasingly secular, humanist educational system, and the cherry on top was the invention of the contraceptive pill. Society was (and still is) reeling from the absolutely huge impact of women gaining control over their reproductive system. All of these factors are contributory to the decline in the priesthood and the decline of religious orders.
What we have seen is not simply the decline of the traditional Catholic Church in the USA, but a decline of a whole culture. The “aw shucks” American culture typified by Andy of Mayberry and the Dick Van Dyke show and Ozzie and Harriet disappeared. The Catholicism of Fulton Sheen and Bing Crosby’s priests went with it. Along with this has been the gradual disappearance of cultural Catholicism. The great grandchildren of the Irish, Polish and Italian immigrants were more intersted in being Americans than Catholics, and the old Catholic cultures simply petered out.
The Second Vatican Council was part of this revolution, and rather than being the cause of the decline, it will prove to be the very salvation of the Church. The English scholar Fr. Ian Ker observes that it has taken about fifty years for a council to really get into the bloodstream of the Church. We’re getting to the point now where we will see the” reform of the reform” really start to kick in. A whole new generation of Catholics (the John Paul the Great generation) have grown up not knowing the pre-Vatican 2 church. All the weird and extreme liberal reactions that grew up in the wake of the Council are unknown by them. They don’t understand what their Catholic grandparents went through in the 70s.
The Church in the United States, and around the world will be different in the 21st century. The old cultural Catholicism will have finally died, and from the ashes a new, leaner, more vigorous, more orthodox and more vibrant church will emerge.
Remember the old prophecy that the 20th century was the century in which God allowe the devil to try to destroy the church? Maybe part of that was not only the terrible revolutions and wars of that century, but the final revolution we experienced in the second half of the century. Within God’s providence that proved to be a time of cutting back in the church.
The vine has now been pruned. Let’s work and pray for the new growth to bear much fruit.
PatheosDwight2007-04-11T23:38:00-04:00April 11th, 2007|Categories: Patheos|17 Comments