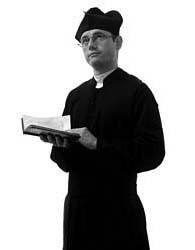 Another question from RCIA: the old Protestant challenge: “Jesus says, ‘Call no man Father.’ Why do Catholics call their priest ‘father’ and the Pope ‘the Holy Father.’

Now we can give this a serious answer, and perhaps we should. We can find passages of Scripture where St Paul refers to himself as the father of his audience and the spiritual father of Timothy. We can give explanations about the Jewish context of the time, where the ‘father’ was a spiritual master who had semi divine status and the devotees bowed down to him.

Instead of arguing with the non Catholic, let’s try to get him to understand how a Catholic views his objection. The typical Catholic has heard Jesus saying ‘Call no man Father’ and honestly never connected this with his own habit of calling the priest ‘father.’ That’s because he’s not used to taking verses totally out of context. He suspects that Jesus’ admonition was spoken to the Jews of the first century to a particular historical context, and finds it strange to have that verse taken out of context and thrown at him as a rebuke in the twenty first century.

He’s bewildered that his Protestant brother has lifted the verse out to argue with him, and is not quite sure whether it is a joke or not.

Here’s how it seems to the Catholic: Let’s say some sincere person pulled up the verse, “Judas went out and hanged himself.” and then the verse, “Go thou and do likewise.” Then he said in all seriousness, “So you see, the Bible says we should all go and hang ourselves!” Any sane person says, “What! are you crazy! That’s not what Jesus meant! That’s not who he was talking to. That’s taking the verses totally out of context. You can’t do that and be serious.”

He needs to have the hermeneutic of humor. In other words, he needs to see that if we must take Jesus’ words, “Call no man ‘father'” out of context and totally literally, then we can (and perhaps must) do the same with countless other snippets and gobbets of Scripture.

Shall we pull out the verses that tell us not to eat shellfish or pork chops, to have our sons circumcised in a religious ritual, for our women to be silent in church and not to cut their hair and keep their heads covered? Shall we prohibit them from wearing trousers and shall we men grow curly locks on the corners of our head and grow our beards long?

Shall we take all of Our Lord’s injunctions with the same serious literalism? Let us tell our parents that we hate them, then pluck out our eye and cut off our hands to enter the kingdom. Indeed, let us have ritual amputation.

“Bless me Father, I have sinned. I have stolen five dollars.”

“Your penance is to have your hand cut off. It is better to enter life maimed…The deacon is performing amputations every second Saturday at ten in the church courtyard. Be there early the lines are long.”

In the end, the discussion comes down to the question of authority. All Christian groups have to decide which Scriptures are to be taken literally, which are for this time and which are not, and how to apply the word of God in our day to our times and to our present needs. By what authority do we do this?

The Catholic says the Church that gave us the Scriptures must interpret those Scriptures. The Evangelical Protestant really believes that it’s every man for himself.