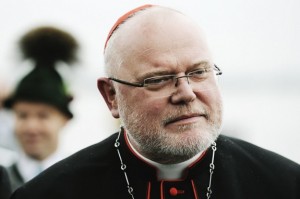 Edward Pentin reports for National Catholic Register on what seems to be a secret Vatican Conference hosted by Cardinal Reinhard Marx on the topic of same sex marriage, re-married divorced Catholics and “the theology of love” which is to replace Pope St John Paul II’s “theology of the body”

A one-day study meeting — open only to a select group of individuals — took place at the Pontifical Gregorian University on Monday with the aim of urging “pastoral innovations” at the upcoming Synod of Bishops on the Family in October.

Around 50 participants, including bishops, theologians and media representatives, took part in the gathering, at the invitation of the presidents of the bishops’ conferences of Germany, Switzerland and France — Cardinal Reinhard Marx, Bishop Markus Büchel and Archbishop Georges Pontier.

One of the key topics discussed at the closed-door meeting was how the Church could better welcome those in stable same-sex unions, and reportedly “no one” opposed such unions being recognized as valid by the Church.

While a wide range of opinions were not represented, various “experts” were present as well as a large representation from the secular press.

Among the specialists present was Father Eberhard Schockenhoff, a moral theologian. Some are particularly disturbed about the rise to prominence of Father Schockenhoff, who is understood to be the “mastermind” behind much of the challenge to settled Church teachings among the German episcopate and, by implication, at the synod on the family itself.

A prominent critic of Humanae Vitae (The Regulation of Birth), as well as a strong supporter of homosexual clergy and those pushing for reform in the area of sexual ethics, Father Schockenhoff is known to be the leading adviser of German bishops in the run-up to the synod.

In 2010, he gave an interview in which he praised the permanence and solidarity shown in some same-sex relationships as “ethically valuable.” He urged that any assessment of homosexual acts “must take a back seat” on the grounds that the faithful are becoming “increasingly distant from the Church’s sexual morality,” which appears “unrealistic and hostile to them.” The Pope and the bishops should “take this seriously and not dismiss it as laxity,” he said.

Father Schockenhoff has also gone on record saying that moral theology must be “liberated from the natural law” and that conscience should be based on the “life experience of the faithful.”

Edward Pentin was the English journalist who interviewed Cardinal Kasper last year and reported his racist-sounding comments about the African bishops. Since then Cardinal Kasper has been relatively quiet, but his activist post seems to have been taken up by the younger Cardinal Marx. Pentin continues:

Speaking to the Register as he left the meeting, Cardinal Marx insisted the study day wasn’t secret. But he became irritated when pressed about why it wasn’t advertised, saying he had simply come to Rome in a “private capacity” and that he had every right to do so. Close to Pope Francis and part of his nine-member council of cardinals, the cardinal is known to be especially eager to reform the Church’s approach to homosexuals. During his Pentecost homily last Sunday, Cardinal Marx called for a “welcoming culture” in the Church for homosexuals, saying it’s “not the differences that count, but what unites us.”

Cardinal Marx is also not alone, among those attending the meeting, in pushing for radical changes to the Church’s life. The head of the Swiss bishops, Bishop Büchel of St. Gallen, has spoken openly in favor of women’s ordination, saying in 2011 that the Church should “pray that the Holy Spirit enables us to read the signs of the times.” Archbishop Pontier, head of the French bishops, is also known to have heterodox leanings.

George Weigel has written trenchantly about the crisis in German Catholicism here, and I wrote here recently asking about the German bishops.

Their position on current questions seems so mainstream Anglican one wonders if they are pioneering a new and radical form of ecumenism.

Perhaps we should devise a new name for the German Catholic Bishops: Germanglicans….

Fr Z has more on this secret conference here. 1Peter5 thinks it is the precursor so schism. Go here.