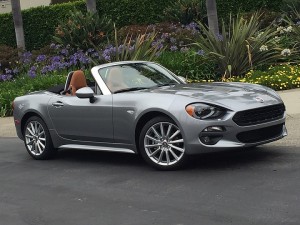 I got an interesting discussion going on Facebook through a picture of the new Fiat two seater sports car.

The question is, “If this car costs less than the sedate sedan he already drives, would it be terribly wrong for a priest to drive this car rather than that one?”

The comments were about 50-50 pro and con. Some folks said it would be outrageous–missing the point that the little sporty number is not actually a luxury car.

Putting the question of this particular car on one side, it raises some interesting questions about what I call “faux poverty.”

What shall we make of the religious people who drive about in beat up cars on purpose? Aren’t they showing off just as much as the person who drives a fancy car to show off? In fact–to push it further–isn’t their ostentation more problematic because it is loaded with self righteousness? The guy who drives a flashy Corvette and shows off a little can be forgiven for his immature vanity. His sin is rather transparent and laughable. The person who drives the Toyota Corolla because he is very aware of how humble and “poor” he is–well that person is just as vain, and more so because he is sanctimonious about it.

This is what I call “faux poverty”–fake poverty–when people who could do otherwise affect poverty or simplicity in order to display it to others. Then when they call others out for their hypocrisy its a bit rich.

Catholics should get over this heretical idea that there is something intrinsically virtuous about poverty. Poverty is not a good thing. Poverty is a bad thing. Faking poverty is actually an insult to the people who are really and genuinely poor.

However…and a big “however” there are some who, for the sake of the kingdom, will embrace a vow of poverty. If they do so, then this is the path chosen by them and by God for their sanctification and the good of the Church. Like celibates, they give up something good for something better. Those who have taken such a vow should live it completely and fully and embrace what St Francis called “Lady Poverty” wholeheartedly. The ones I know who do this don’t show off about it. They really are poor and living with the poor and loving the poor.

What about the rest of us? We follow a path of “apostolic simplicity”–attempting to love all things according to their worth, and thereby to learn true detachment. We love a nice car because it provides good, safe transportation and because it might also be a thing of beauty and charm. But we do not love it for the sake of our image or because it attracts women or because it makes us feel rich or any other kind of stupidity.

Finally, the mark of one who is moving towards “apostolic simplicity” is that, no matter what their income, they are generous people. They live life to the full and love life to the full–and that means they give more than they get and they live in total freedom.