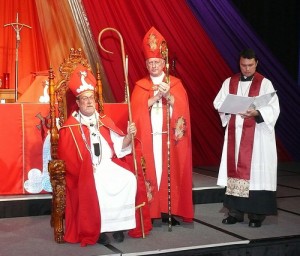 Bishops of the Charismatic Episcopal Church

More than once I have made a Freudian slip of the fingers when typing and written “demonination” instead of “denomination”, and with more and more hip hop pastors wearing jeans and T-shirts maybe I should write “deniminations”…or maybe just get over it all and call them all “abomination”

Catholics apologists are fond of throwing out the claim that there are over 30,000 separate Protestant denominations. “How does this fit with Jesus prayer that we should all be one with one flock and one shepherd?” we ask.

Look around you. Where we are in South Carolina the local churches are “re-branding” themselves as fast as possible to try to keep up with the community church phenomenon.

If local allegiances to national and international denominations are falling, then the denominations themselves must also be faltering. Another sign of this disintegration is that the theological and liturgical boundaries are now completely blurred. Presbyterians used to be Calvinists. Methodists were Arminian. Baptists were often Dispensationalists. Their territory was marked out by their history, their theology and their worship style. Baptist pastors wore suits and had no set prayers. Presbyterians wore preaching gowns and used the Lord’s Prayer and maybe the Creed. Episcopalians wore vestments and used the Book of Common Prayer. Methodists wore gown and used the Methodist liturgy. Lutherans likewise.

Increasingly all this is up for grabs. You can find low church Evangelical types in all the denominations and likewise you can find high church liturgical types in all the denominations. Not long ago I was taking a funeral and one of the undertakers told me he goes to a “Liturgical Baptist Church”. When I asked what that meant he said they had communion every week, lit candles, celebrated Advent an Lent and used a lectionary. “We even have a stained glass window!” he chortled. In this mix is the charismatic element so you can find Evangelical Charistmatic types in all the different churches and streams of Protestantism.

Out of this post modern mayhem has come the convergence movement–which is a new movement among Evangelicals and Charismatics to add on elements of the historic church. They have bishops (Tony Palmer the Pope’s missionary friend was one) liturgy, (usually Anglican) devotion to the saints, reverence for the writings of the Apostolic Fathers and lots of other “catholic” trappings. Added to the Evangelical Charismatics who are making up their own “historic church” by simply doing a kind of smash and grab on Catholicism and Anglicanism are the large numbers of disenchanted Anglicans.

Refugees from the Episcopal Church have been starting up their own little denominations since the late seventies when ECUSA really started to get serious about the liberal agenda. You can check out the fascinating list here. This rag tag bunch of believers range from wild eyed crazies who call themselves “The Metropolitan Archimandrite of North America and the Western Isles” and have a cathedral in their mother’s basement to faithful, serious Christians who have dropped out of formal Anglicanism and are seeking a way forward. Continue Reading