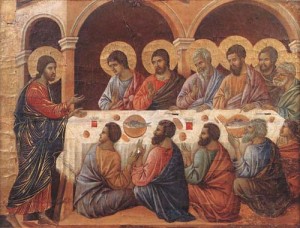 I get an increasing number of requests to assist Protestants who are interested in the Catholic Church.

One came in today in which a Presbyterian has come to believe in the Apostolic Succession but wonders if that necessarily means he must become Catholic. In the creed we profess the four marks of the Church: that she is “One, Holy, Catholic and Apostolic” The Catechism puts it this way:

“This is the sole Church of Christ, which in the Creed we profess to be one, holy, catholic and apostolic.” These four characteristics, inseparably linked with each other,  indicate essential features of the Church and her mission. The Church does not possess them of herself; it is Christ who, through the Holy Spirit, makes his Church one, holy, catholic, and apostolic, and it is he who calls her to realize each of these qualities.

The important point that interests me is that these four characteristics are “inseparably linked with each other”. While elements of the four may exist within other ecclesial communities, if all four are not there then the individual characteristics which may exist partially in other Christian groups are just that: partial and incomplete and therefore not real. In other words, if you cannot have one of the four marks if you don’t have all four. This is because the unity, catholicity, holiness and apostolicity of the church are interdependent. A claim to have just one or two of the four doesn’t work.

So, for example, the different Anglican groups all claim apostolic succession. My how they love to tell you the pedigree of their bishops. While they may have a valid, but irregular form of apostolic succession their apostolicity is incomplete because they do not have the other three marks of the church. They do not have unity, but are divided amongst themselves and divided from the historic church. They may be holy as individuals, but their church does not have that mark of “holiness” described in the catechism as a corporate, real and organic trait. Neither are they Catholic because their churches are individually governing and while there is a global communion of Anglican churches it is not universal in both time and place as is a truly Catholic Church.

Similarly, a non Catholic sect might enjoy Unity among its members, but would lack apostolicity, holiness and catholicity.

When sharing the faith, therefore, it is important to try to stress the fact that the Catholic Church’s being united is part of her being universal, sanctified by God and apostolic. All four are equally interlocked with one another so that I can say, “I am United in the Universal faith–the faith handed down from the apostles, and in this way God is drawing me into his own holiness.

This needs to be communicated as being a living reality not simply a credal formulation. Continue Reading