Document Discovered of a Jesus Eyewitness?

Document Discovered of a Jesus Eyewitness? 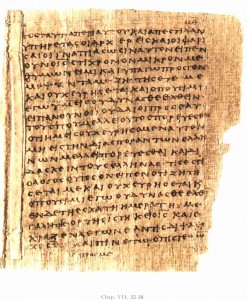 I clicked through and read the article. It sounded so convincing. In the Vatican archives a scholar unearthed a manuscript from a first century historian who recounts a journey from Persia to Rome, and on the way he witnesses a miracle by Jesus of Nazareth.

Is that Good News or Fake News?

If this were true it would overturn decades of negative, critical comment on the New Testament. All doubters of Jesus’ existence would be silenced. Such a find would be truly earth shattering. It would be bigger than the discovery of the Dead Sea Scrolls.

When I scrolled down the page however, and read other headlines like “Japanese Whaling Crew Eaten Alive By Killer Whales” or “Little Old Lady Arrested for Making Fur Coats Out of Neighbor’s Cats” or “Former Pope Warns of Vatican’s Alien Agenda” it gave me pause.

Its a fake news site. They have not discovered a first century document from an eyewitness of Jesus nor have they discovered the bones of St James or a vial containing the breast milk of the Virgin Mary.

The insidious nature of fake news sites is not only that the writers have a knack for crafting an alluring headline and a convincing article, but the most troubling thing is that we want to believe it. That’s why we clicked there in the first place.

Of course this is nothing new. Bogus relics and exaggerated myths about Jesus have been a disturbing part of church life from the beginning.

Fake news sites reveal the sad truth that  many of us do not have the critical skills necessary to be sift out the truth from the lies. We were educated in a critical and relativistic culture, and this has destroyed our ability to assess truth.

What I’m getting at is this: Relativism is the idea that there is no such thing as objective truth, or if there is, we can’t know it or articulate it and there is certainly no infallible authority to tell us what is objectively true.

But the problem is, if nothing is true, and no authority is to be trusted, then any authority is just as reliable as the next one and any statement might be true or might not be true.

In other words if nothing is true, then anything might be true.

Relativism and a critical mindset has therefore made us not more critical, but more gullible.

When you combine the fake news sites with the obvious bias and lies of the mainstream media and the false philosophy and fake values of the TV and Hollywood culture it makes you tired and sick.

Maybe the whole sad lie should make us turn off all the fake news and grab our Bible and read the Good News.